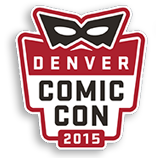 It’ll be nice when we don’t need things like “women in comics” panels anymore. When the work of women in the industry and discussion of female characters will stand side by side with that of men and given the same priority and thoughtful debate as that of male creators and male characters. Until then, we need them, if only to remind the world that not only do women read, create, and love comics now, but they always have – despite a seeming erasure of women from comics history.

Which is why Denver Comic Con’s “Women in Comics” panel about the history of popular female superhero characters could’ve been a wonderful way to correct that. I say “could’ve been,” because DCC’s “Women in Comics” panel didn’t actually have any women on it. So, while they didn’t contribute to the erasure of women from comics history – they inadvertently contributed to the erasure of women from comics’ present.

We first got word this was happening during DCC, as we do about so many things, via Twitter. Tweets like this started popping up from people who were in attendance at the con:

This is happening at #DCC2015. Let’s see how this ALL MALE panel about women in comics goes #noneofthismakesanysense pic.twitter.com/hQZhfFc0CQ

Apparently, @GeekChristy asked someone about why there weren’t women on the panel, and she was told:

We wanted to get some clarification. Specifically, how it could be that someone like Kevin Robinette, who’s an expert on the history of women in comics “couldn’t find any” women who could speak knowledgeably on the topic alongside him? Especially since Trina Robbins, a comics historian, creator, and expert on women in comics herself, was attending DCC and was on other panels. We wanted to know if any attempt had actually been made and women weren’t available? Or if they just couldn’t think of whom to ask?

The Mary Sue reached out to Denver Comic Con asking these questions, and got an exclusive statement from DCC’s Director of Programming (and Chairman of Pop Culture Classroom, the organization behind DCC), Bruce MacIntosh. Here’s what he had to say on the matter, along with my commentary:

Friday afternoon’s “Women in Comics” panel was presented by respected comics historian and college instructor, Kevin Robinette. It was a last-minute addition (not even in our printed schedule) because Kevin offered to present an abridged version of his college course on the History of female comics characters and creators, and we wanted to add another panel with an educational focus on the history of comics. The college course, which he asserted he has taught hundreds of times and presented in its summary form at dozens of comic conventions, is called “Women in Comics – Creators and Characters” and therefore so was the panel.

Great! I’m sure he knows a lot of stuff. He also invited other people to participate on the panel with him. Were any of the people he asked women? Did he think to ask any at all? Our concern is that not only did it not even cross his mind, but it seems not to have been something that concerned DCC. Are we wrong?

The session was never intended to be a staging of current female comics creators, and the panel description clearly indicated that it was a scholarly presentation, in the same vein as our “Page 23” Literary Conference, or our “Education” tracks being held in neighboring rooms: “With the female interest in comics increasing lately, this panel discusses many of the popular female characters from the beginning of the superhero mid 1930s comics. Also a focus on some of the women that were able to break in the mostly all male club of creating comics during that time. Includes an introduction to many of the female illustrators/creators attending the convention.”

We at DCC realize that a quick read of the title could be misinterpreted to indicate that it might have women creators on the panel, but the description or sitting in the panel room for five minutes would clearly indicate that Mr. Robinette’s intention was not to presume to speak for the perspective of current women creators, but to present an historical retrospective. It is also not the policy of DCC to either re-write the content of the scholars’ content, nor refuse a male presenter’s presentation on female comic characters and creators; any more than we would presume to stifle a woman historian’s perspectives on male creators, censor a white creator’s opinions on African-American’s characters, or a LGBT creator’s thoughts on particular straight creator.

No, we get it. It was a scholarly, historical presentation about female comics and creators of the past. We really, really get it. We’re not misinterpreting the title. We’re wondering whether Mr. Robinette knows any female scholars/experts on the subject. We’re wondering whether he knew Trina Robbins was going to be there, and whether or not he thought to ask her to jump on board. We’re wondering how an “expert” in and “scholar” of the history of women in comics doesn’t make it a priority to have at least one woman on the panel for a female perspective, and we’re wondering why Denver Comic Con didn’t question this. We’re not asking DCC to “refuse a male presenter’s presentation on female comic characters and creators.” We’re asking both DCC and panel moderators to include female perspectives on their panels. There’s a huge difference. Why did he ask those particular men, and did he think to reach out to women at all? That’s the issue.

What’s more, it’s interesting that the people Robinette did have on the panel were Craig Glassen, an art instructor, and Jason H. Tucker, representing a graphic novel app. Can they speak as knowledgeably about the history of women in comics as Mr. Robinette? Can they speak as knowledgeably as the female comics historians in attendance at DCC? No offense to these gentlemen, but why them? MacIntosh continues:

It is important to stress that Denver Comic Con is the only comic convention with a Diversity Mission for Programming, which we implemented now three convention cycles previously. Since it’s inception, DCC has pro-actively striven to bring out to Denver and feature prominently guests of color, women and those from the LGBT Community. This is not lip-service, but a concerted effort to create a community that is inclusive of all comic fans regardless of gender, race or orientation. To assert that we are not sensitive to the views and contributions of women in pop culture does a disservice not only to DCC’s programming efforts, but minimizes the contribution of the dozens of women, LGBT and minority creators whom we have hosted and hundreds of hours of diversity-focused programming we have created.

We appreciate that effort. Sincerely. Thank you for that. 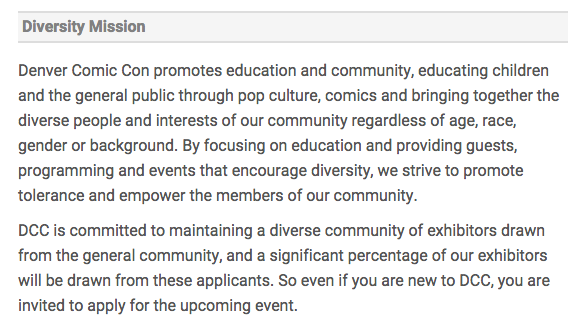 Which is why something like this panel surprised us. Because here, in the most obvious case where that diversity mission could have and should have shone brightest, it didn’t. And we still don’t really know why.

To specifically address the female creators we did host at DCC 2015 and the dozens of hours of programming aimed specifically at current women creators and characters, here is a small sample of some of the content we specifically created to this end. (This does not include the highest-quality programming submitted and presented by our active fan community.) We brought out respected comics creator Trina Robbins and comics industry editor and historian Jackie Estrada, specifically to speak to the perspective of women historically and currently; they both appeared in the documentary film She Makes Comics, which DCC obtained the rights to screen this weekend, followed by Q&A with the two women. We highly recommend that fans of all genders watch this film and we hope to soon post the commentary from the two comics’ professionals on the website of our non-profit literacy foundation Pop Culture Classroom (www.popcultureclassroom.org).

Ah, yes! You do acknowledge that you had female comics historians in attendance! Wonderful! Did DCC or Mr. Robinette think to maybe ask one of them to hop on the panel? Even if it was last minute? Were both Trina Robbins and Jackie Estrada unavailable during the “Women in Comics” panel’s time slot? A quick look at your schedule for that day tells me no, but we could be mistaken. Are we?

Among many other female pop culture professionals, DCC also hosted playwright Crystal Skillman (King Kirby). Crystal appeared on Monday afternoon’s panel, “Is There Discrimination in Pop Culture?” with an African-American rapper and teacher, a Latino TV Director, the aforementioned veteran comics’ creator Trina Robbins, and moderated by a transgender animator and teacher. Upon hearing of the controversy generated by one woman’s complaint that no women were on a comics’ panel about women, Ms. Skillman herself pulled together a flash-mob-style panel of just some of the many female comics creators that Denver Comic Con brought out for the 2015 event. The panel – entitled “Women in Comics – NOW!” did discuss some of the issues facing female creators today, but was more a lively celebration of the creators on the panel as well as an analysis of the progress that has been made due to activists like Trina Robbins and enjoyed by fellow comics professionals on the panel. The extra-long panel was well attended by men and women alike, and featured Robbins, Amanda Connor, Marguerite Bennett, Joelle Jones, Meghan Hetrick and Hannah Means-Shannon.

Denver Comic Con invites and hosts dozens of female comics’ creators and pop culture professionals every year, and we strive to place them on as many panels as they will consent to attend. We hope that the support that we received from Crystal Skillman and the panelists she brought together on the last day of DCC 2015, will serve as inspiration for more women creative professionals to come to Denver in 2016 and beyond, and speak on panels about the issues that interest them and their fans.

Denver Comic Con, thank you for your efforts thus far. Please know that those of us who’ve taken issue with this panel are in no way dismissing these other things. However, things like ally-ship and diversity are continual works in progress. Good allies always question and strive to improve, and if they are told by a marginalized group that something can be done even better, they listen.

When I moderated a Doctor Who panel called “Moffat’s Women” at GeekGirlCon several years ago, it contained two cis women of color, a queer trans woman, and a cis man – and this wasn’t an accident. As a moderator, I knew that even though we were talking about female characters on Doctor Who, that I’d want as diverse a collection of perspectives as possible, and so I sought them out. Sure, I could’ve made it easy on myself and just asked a bunch of my female friends to join me on the panel, and had an all-cis-woman chat, but where’s the fun in that? The discussion we ended up having was much more interesting, because everyone came at the topic from a unique angle.

The point here isn’t that Mr. Robinette shouldn’t have done the panel, the point is that having a woman on this panel should’ve been a priority, not an afterthought. The point is that there should be women on all panels at every convention – not to fill a quota, or stave off people’s ire – but because female perspectives are important, no matter what the topic, and women exist who are knowledgeable about any topic you can think of. You just have to look!