It's the champagne of vegetable-flavored sodas. 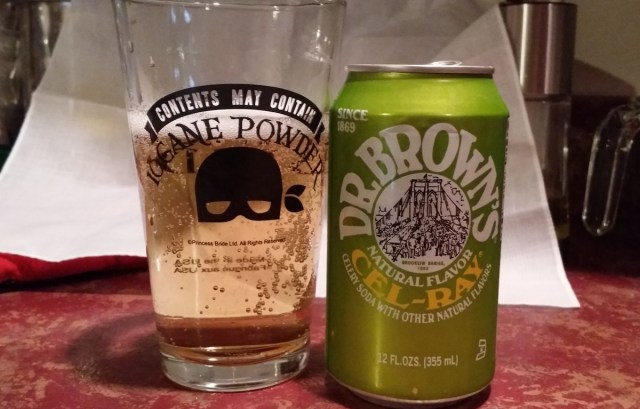 This week on the podcast we play with Siri, debate whether diversity affects the enjoyability of a show, everyone says “bananas” too many times, and Glen shares a special treat with the rest of the team — his favorite soda, which also happens to be Dan’s least favorite soda. It’s a cel-ray-bration!

As always, you can listen to the show right here, or you can subscribe in iTunes. Your call.

Yesterday we wrote about Siri’s reactions to being asked “What does the fox say?” If you’re curious what her answers sound like, but don’t have an iPhone or for whatever reason don’t want to ask her yourself, we have the audio in this episode.

We all agree that diversity is great, but does it actually make the quality of a show better? We use Sleepy Hollow as an example, and also discuss the dreaminess of Ichabod Crane.

For your Editors’ Picks this week, Glen brought in a can of his favorite soda, Doc Brown’s Cel-Ray. It’s a celery flavored soda that’s hard to find outside of New York and Florida, but it’s well worth it if you can get a hold of a can. At least, Glen thinks so. You can listen to the rest of Team Geekosystem react for yourself.

Carolyn is anxiously looking forward to complying with a Netflix suggestion, and thinks its worth your time as well.

My pick this week is a two-parter. I haven’t actually watched it yet, but the Netflix “Recommended For You” wizard suggested after a week in which I watched It’s Always Sunny, Cameron Diaz movies, and ghost hunter shows, that I give Ninja II: Shadow of a Tear a try. How a Scott-Adkins movie about a man using martial arts to revenge the murder of his pregnant wife fits into my eclectic viewing history I don’t know, but I have to find out, and I’d like to thank Netflix for giving me a risk free way to take chances on a dubious-sounding movie. So, that’s the second part: I recommend Netflix, for everyone who’s forgotten about it.

Dan goes back to a Geekosystem favorite, and reminds everyone that Community is back, and it’s as good as ever.

If you’re reading this, chances are that you either watch Community already or have no interest in it, but if by some fluke you fall into some third category, you should really give the show’s fifth season a try. All three episodes of the season so far have been strong in their own way, and the most recent episode, which is what spurred me to make the show my editor’s pick, is easily one of their best episodes ever.

Whether you’ve never watched before or are a fan who got turned off by the contentious fourth season, give season five a try.

Victoria is actually just making a single pick this week, AND it has nothing to do with Sailor Moon!

My pick this week is The Wire. Yes, I know, I’m about ten years late to the party, but it is pretty great, especially if you’re like me and pretty bored with the current dramas on television right now (somebody on Ray Donovan won a Golden Globe? Really, guys? Ray Donovan?). I’m one episode away from finishing the second season and while I’m not completely enamored with every character who isn’t played by Idris Elba, I can’t say that there isn’t one that’s not incredibly interesting in their own way, even when they’re pissing me off. Right now it doesn’t quite live up to the ridiculous amount of hype that people give it as the best show ever put on television ever in the world, but again, I’m only two seasons in and that might change. Regardless, it’s definitely worth watching.