Gay Penguins to Be Reunited | The Mary Sue

“Gay” Penguin Couple Will Be Reunited After Zoo-Imposed Separation 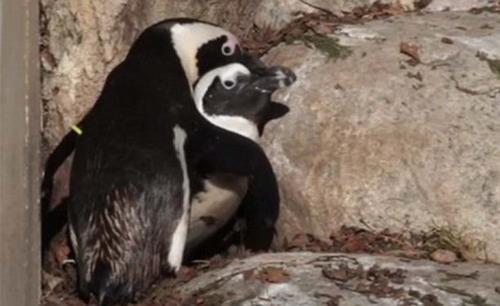 We here at The Mary Sue are big supporters of both the LGBT community and adorable animals. And this week, we were sad to hear that Buddy and Pedro, two male African penguins who reside at the Toronto Zoo and have been involved in a very loving homosexual relationship, were going to be separated so they can mate with other female penguins. However, the zoo has issued an update reassuring us all that come this spring, Buddy and Pedro will be reunited! Yay!

Buddy and Pedro caught the eye of their zookeepers when they started exhibiting courtship and mating behaviors with each other, including their donkey-like mating call. However, their unexpected relationship was fully supported by the zoo, and they continued to allow the penguins to carry on as they wished. While scientists who study animals don’t use the terms “homosexual” or “heterosexual” to describe non-humans, they have characterized Buddy and Pedro’s relationship as “pair bonding” between two animals of the same gender. But while it’s not problematic, it is unusual:

They defend their territory, preen each other, and are constantly standing alone together. In fact when the Star visited the exhibit this week Buddy emerged from the water, followed a few moments later by Pedro. The two huddled together for quite some time.

But as tolerant (and curious) as the zookeepers are, African penguins are an endangered species, and they need to mate. And that’s why the decision was made to temporarily separate Buddy and Pedro. That, however, is the only reason for the separation, and yesterday brought the happy announcement that after a period of mixing with females during mating season — and, hopefully, meeting the goal of impregnating one — the two will be reunited and able to pick up where they left off. Says Tom Mason, Curator of Invertebrates and Birds at Toronto Zoo:

“The population is good but we have to be careful to ensure that all individuals or as many as possible have genetic representation within the community. This will maximize the chances of survival of the population. … There will be a limited time of separation but it will not be permanent. No matter what happens all the penguins will be re-united by spring. If Pedro and Buddy wish to get back together, they will be welcome to do so.”

There you have it: A very happy ending for Buddy and Pedro!

You might recall that this is not the first time we’ve heard about gay penguins: In 2009, Roy and Silo were not only involved in a similar relationship as their Canadian counterparts, but they also incubated an egg and cared for the chick, Tango, after it hatched. And then they were the subject of a children’s book called And Tango Makes Three, which caused great upset in the homophobic human community.

Previously in Animals in Peril