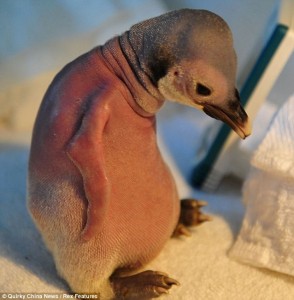 You may recall that this time last week, we brought you the story of the baby seal who was shunned by his family because his fur was ginger. He was rescued. Well, before you reach for your second box of tissues, we have good news about this five-day-old bald baby penguin: he was also rescued. But the bad news is that he was also shunned by his family. But remember the good news we just mentioned in the previous sentence, and add to that this: new feathers. He has been re-introduced to his family and he now has feathers. However, the people at Pixar are looking at this and getting ideas for a new movie called Bald Penguin and Ginger Seal: An Iceberg Made From Tears.

So, here is what happened to this little guy: Born in mid-August without any feathers in China’s LHT Pole Aquarium, this baby penguin was almost immediately rejected by both of his parents, who kicked him out of their family group, leaving him in icy conditions to fend for himself. When the aquarium’s zookeepers noticed the neglect, they decided to save the then-five-day-old penguin from certain starvation and give him hands-on treatment. They discovered that the penguin was born with a condition that prevented him from absorbing nutrients, which they believe caused the lack of feathers and only worsened without his parents’ care or protection. Let him show you what happened: 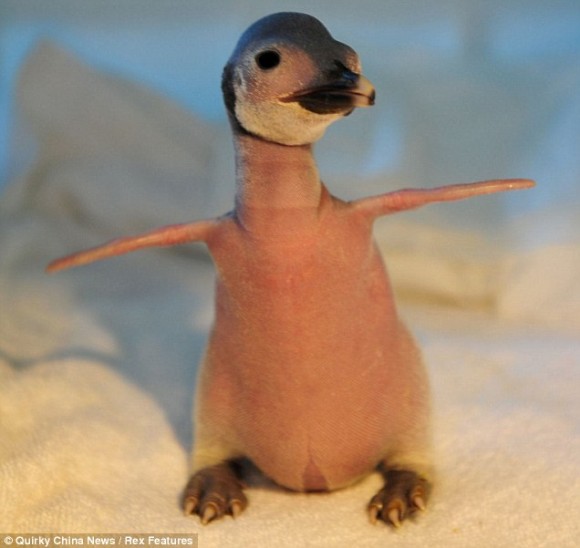 Feathers all gone! But fortunately, since he has received proper nutrition and care, he can now proudly show off his new coat of fluffy feathers. 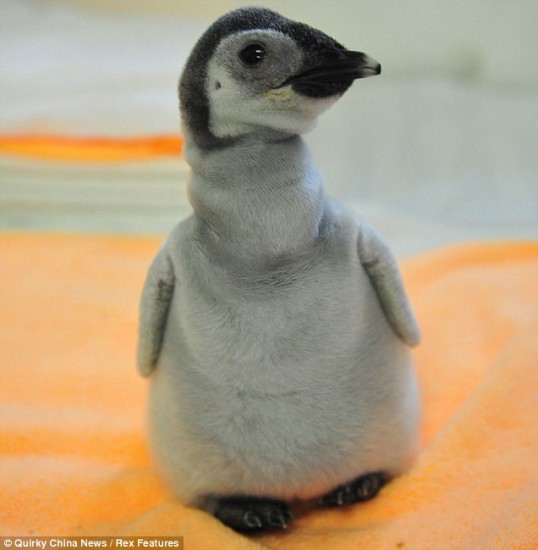 Upon regaining his heath, the penguin was reintroduced to his parents, who now accept him. Want to see another picture of the healthy, formerly bald penguin? Yeah, we thought so: 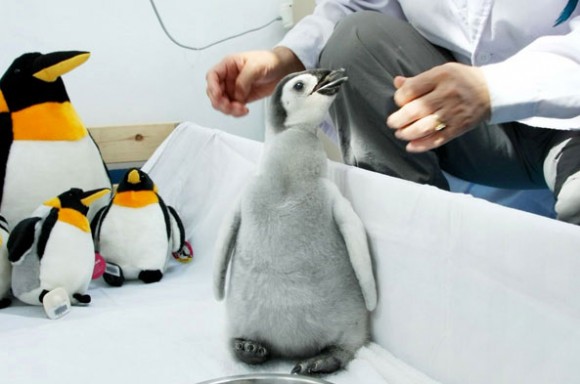 We cannot guarantee an uplifting, family-friendly-computer-animated-movie-worthy story about an abandoned-then-rescued “baby animal who is different than the rest” story every week, but goshdarnit, we will try. Anything to save us from posting about Human Centipede 2.

(Pics, story via The Sun, AOL, The Telegraph, Daily Mail)