Someday we won't have to do these anymore. Hooray. 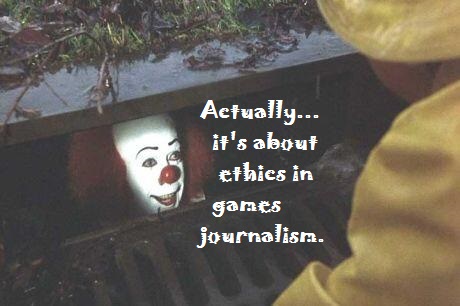 Every morning I wake up and forget, just for an instant, that Gamergate is even a thing. It’s consistently been the best part of my day for a week now. Alas, the “movement” is still trucking, so here’s (some of, since it’s churning out faster than we can write it up) what you missed if you’re not on Twitter all day and don’t have to subject yourself to this news on a constant basis.

First off, some weird news: The Occupy Wall Street Twitter has officially come out as a Gamergater, citing the admittedly harsh and terribly-thought out tweets by Gawker’s Sam Biddle as “anti-geek hate speech.” No, really:

Sam Biddle of Gawker has been publishing much anti-geek hate speech lately. Tell Gawker’s advertisers how you feel! pic.twitter.com/T3p9ayNVTy

It’s worth noting, of course, that the Twitter account no longer belongs to the same people it did when it was first launched in 2011 (which is a problem Occupy Wall Street’s been having for a while with other Twitter accounts linked to the movement—that’s what you get for not picking a leader, I guess) . The person who now occupies @OccupyWallSt, so to speak, is Justine Tunney, a Google employee who claims to have founded the movement herself and who subscribes to the same kind of neoreactionary politics that we’ve been seeing a lot from Gamergate supporters. Que sera sera, I suppose.

In other news, IGN finally released a statement about the controversy, and it’s…well, it’s quite possibly the most milquetoast thing you could write about the controversy. Basically it amounts to “hey, harassment is bad, but also we didn’t want to tell you harassment was bad in case doing so made the harassers think that we noticed them.” Which is where a lot of harassers derive much of their power, by the way—in not being publicly noticed. But I digress. Here’s an excerpt:

In the hopes that we can elevate the way we all talk about games and gamers, we want both to reiterate our commitment to our community guidelines and to strongly advocate for their extension into all our interactions with each other:

The good news is, if you are breaking these rules, you can stop and find that games will still be just as amazing as ever.

Those guidelines are all solid and commendable, but see that last part? Where it more or less says, “If you are threatening someone with violence, at least you still get to play video games!”  That… might not be what anyone on either side wants to hear out of you, IGN.

Certainly former NFL player Chris Kluwe didn’t go that route in his ridiculously caustic op-ed from the other day—and he’s not backing down, either. In his Reddit AMA yesterday, he spoke out once again about what he sees as the the “irredeemable” toxicity of the Gamergate hashtag. To that end, he has some advice for how Gamergaters who do genuinely want to see positive changes made to games journalism and the industry as a whole should go about doing it:

I think that the majority of you probably want legitimate change, but you’re unwilling to take the steps to make that change because it’s hard work. If you want real change, you need a real movement, with members and leaders that are accountable, and you absolutely cannot continue associating yourselves with a brand that is as toxic as Gamergate has become.

Have a stated goal, a roadmap for achieving that goal, and members and leaders that can be held accountable. Otherwise, you’re doomed.

[The journalistic ethics part of the message] has some [merit], but it needs to be its own thing with clearly stated goals, how to achieve those goals, and a way to hold members and leaders accountable. Otherwise, you’re just another amorphous Internet thing that’ll dissipate in a couple months.

Hey, you know what? That’s really not a bad idea, Gamergate, because right now the people who are clamoring out of the woodwork to speak on your behalf aren’t really that much to write home about. After all, Occupy Wall Street didn’t have a leader, and look how they turned out. How long ago was the last time you’d even thought about OWS before we brought it up four paragraphs ago? Exactly.

Finally, if you need a good laugh after slogging through all of this online turmoil, “actually it’s about ethics in games journalism” has quite literally become its own meme. And best of all, it’s not actually at any one Gamergater’s expense: like #NotAllMen, it pokes fun of the rhetorical device, not necessarily the person who believes in it. With any luck, it should serve to show some of those who’ve used the device in the past how truly ridiculous they sound at times. This one’s my personal favorite, but here’s some other delightful submissions:

Well, I had to get in on this … pic.twitter.com/4PUxiVpTvP

Here’s to hoping that one day soon, all of this chaos will be just a blip on a Know Your Meme article that has nothing to do with anything.

(via The Daily Beast,  Salon, image via actuallyethics.tumblr.com)