Game of Thrones Recap: The Old Gods and the New | The Mary Sue

Game Of Thrones Recap: The Old Gods and the New 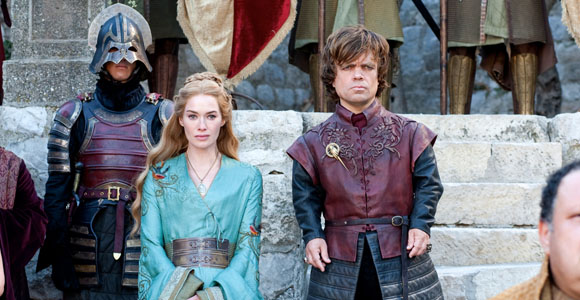 Editor’s Note: We’re now onto the second half of HBO’s Game of Thrones Season 2 and big things are going to start happening very fast. Amy Ratcliffe is back with her recap of last night’s episode as well as some extra thoughts on changes from the book series. Spoilers ahead of course, (book talk is at the very end if you want to avoid it) and don’t forget to catch up with last week’s recap if you missed it!

Season 2: Episode Six – The Old Gods and the New

Apparently it’s becoming a thing for craziness to happen in the first five minutes of Game of Thrones. It definitely puts your pulse at the right speed to keep up with the pace of the show. Last night’s episode, The Old Gods and the New, had my heart racing more than once.

We dived right into an attack on Winterfell. It was jarring to enter an episode in mid-action, and though I knew what was up as soon as we saw Maester Luwin rushing a raven to the skies, I was concerned about people who hadn’t read the books knowing what was going on. Luckily that was answered in the next scene with Theon waking up Bran and basically saying, “Ohai, I’m invading my previous home and I know we were like brothers and all, but can you just yield?”

Bran reluctantly agrees to hand over power in front of the people of Winterfell. In the middle of it though, Ser Rodrik returns from the trap Theon set at Torrhen Square. He tries to put the sniveling putz that is Theon in his place and spits in his face. Theon’s first mate pushes him to take the iron price for Rodrik’s insolence. Despite begging from Rickon, Bran, and even Maester Luwin, Theon beheads Rodrik. He does a terrible job with it; he has to hack three times and use his foot to finish the deed. It was hard to watch, and Bran and Rickon’s reactions were heartbreaking.

Osha volunteers to serve Theon, which didn’t throw me off for a second. Not even when I read the books. It was obviously a ploy, and she uses her womanly wiles (by the by, I feel weird about seeing Tonks in the buff) [Editors note: US TOO] to distract Theon. Once he’s passed out and she deals with a guard, she sneaks out of Winterfell with Bran, Rickon, the direwolves, and Hodor.

You can imagine Robb’s anger when he hears about Theon’s betrayal. He can’t understand why, and even though he’s obviously already feeling rotten enough about it, Catelyn can’t help but throw in, “I told you can’t trust the Greyjoys.” Ouch. He’s ready to head north and tear off Theon’s head, but one of his bannermen, Roose Bolton, talks sense into him and says he will send word north and have his bastard lead men to re-take Winterfell.

Robb also found the Lady Talisa in the camps and flirted with her. He was on the verge of inviting her to do something when Catelyn arrived. She was polite to Talisa, but as soon as she was gone, she reminded Robb that he is already promised to a Frey daughter. We’ll see how that stands against young love.

The remaining Stark children, Arya and Sansa, were both put into situations that had me on the edge of my couch. More than once. While Arya is performing her cup-bearer duties, none other than Littlefinger shows up to speak with Tywin about the value of the Tyrells. Arya freezes as soon as she heard Petyr Baelish announced and so did I. The thing about servants is that people tend not to notice them. She sticks to the shadows and even manages to keep her face turned away when she spills wine on Littlefinger. He emphasized the phrase “Stark daughters” just enough that I think he saw her, though he doesn’t say anything.

Later, she was smart enough to distract Tywin so she could swipe a note about her brother Robb from the table, but she wasn’t fast enough to get away with it. Amory Lorch caught her and immediately went to tell Tywin. Arya found Jaqen in record time and named Lorch as her second person to be killed. Then she mentioned it had to happen right now, and the annoyed look on Jaqen’s face at being rushed was priceless. He delivered and killed Lorch right as he walked into Tywin’s chamber. I’m guessing Tywin is going to tighten up security after that.

Sansa had an even more frightening experience. The entire royal party went to the docks to see Myrcella off to Dorne. Cersei was not happy about it and threatened to repay Tyrion for it one day. She’s an intelligent person; you’d think she’d realize it’s safer for Myrcella to be anywhere but King’s Landing. On the way back to the Keep, a peasant tosses a cow pie at Joffrey’s head. Because he’s an overreacting idiot, he orders his guards to kill the person who threw it. That phrase incites a riot. Cersei, Joffrey, Tommen, and Tyrion get to safety, but Sansa is grabbed and pinned down by three men. She is saved in the nick of time by the Hound. Whew.

Things were less nerve-wracking in the North. Jon, Qhorin Halfhand, and a few other brothers are on the lookout for wildlings to lead them to Mance Rayder. They find a few wildlings and starting slicing first and asking questions later. Just as Jon is about to kill one of them, he realizes it’s a girl. He has a hard time offing a woman, and even though he tells Qhorin he’ll kill her and catch up with them, he’s just not able to do it. So after a chase that separates him from his brothers, he ties the woman, Ygritte, up and ends up sleeping next to the red-headed wildling (for body heat). It’s really not the worst way to end a day. [Editors note: Read our article in which actress Rose Leslie talks about being cast as Ygritte!] 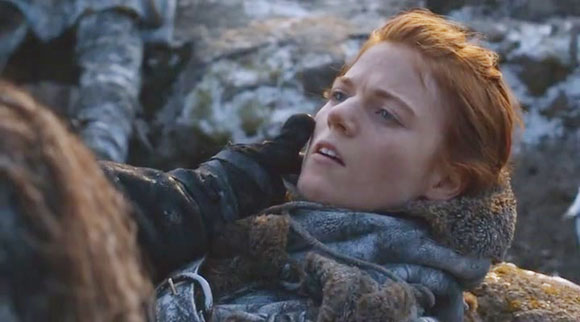 Finally, in Qarth, Dany can’t get anyone to help her. She doesn’t exactly have the lightest touch and keeps making demands for ships followed by “I’m a Targaryen, dragons, blah blah blah.” I adore the heck out of Dany, but she’s got to learn some finesse. A spice trader she asks for ships points out all the practicalities of invasion to her. She doesn’t have an army, she doesn’t have allies. She’s not a good investment even though she has dragons.

And about those dragons. Dany and Xaro return to his palace after failed negotiations to find the ground littered with bodies and blood. Dany fears the worst, and she’s right. Her children have been dragon-napped and so it seems has her handmaiden who was with them.

More than a few bits in this episode were completely new or changed, and though I know the framework, I found myself being surprised. I actually like how enough is different from the book that I’m still able to worry. I don’t know every single action ahead. I was able to feel completely scared for Arya and Sansa tonight because it might not follow what I’ve read.

None of the scenes with Tywin and Arya are in the books, and I’m so glad they’ve been added to the screen. I like seeing a different side of Tywin and seeing Arya be subservient while still being very clever. Their talks are forcing out interesting bits about Tywin and Jaime, and I appreciate that the writers are using Arya’s time in Harrenhal in a such a way that we learn more about characters we already know rather than introducing characters who would only be around for a little while. It’s smart.

One of my favorite moments in this episode was seeing Tyrion positively lose his temper. After they all made it to the safety of the Keep Tyrion raged at Joffrey for fueling the riot. We’ve seen Tyrion annoyed, ticked off, and frustrated, but we’ve never seen him this angry. He slapped Joffrey (oh, there needs to be a Tyrion in Winterfell to slap Theon) and dressed him down. You can tell that it’s been welling up, and this pushed him right over the edge. I wouldn’t want to get on Tyrion’s bad side.

There are always going to be an avalanche of minor changes; chapters are often combined and reorganized just for a single scene. Given that, I’m just going to touch on the big parts that stuck out for me and that I didn’t already mention above.