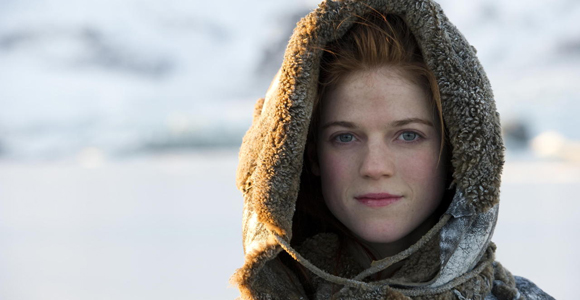 If you haven’t read George R. R. Martin’s A Song of Ice and Fire and prefer to go into the HBO series Game of Thrones completely fresh, you may want to turn away now. We won’t be posting any spoilers for tonight’s new episode but we will be giving some information on a brand new character played by actress Rose Leslie. Read on for how the actress landed the role of Ygritte and what her favorite part of playing her is.

Leslie hasn’t done much press since it was announced she would take on the role of the wildling Ygritte, but she spoke with Access Hollywood who say, “the naturally redheaded Rose said she put great care into bringing the wildling spitfire to life, diving heavily into the novels as her source material, as she worked to capture the wildling woman’s independent and utterly fierce personality.”

Access Hollywood says they’ll have more with the actress after tonight’s episode airs but they did talk to her a bit about getting cast.

Considering the character of Ygritte’s biggest feature is that she’s a redhead, or “kissed by fire” as it says in the books, Leslie said there were a lot of women like her at the audition. “It was amazing and I’m sure I’m not the only redheaded girl in that room who thought the same thing,” she said. “You kind of looked around and you’re like, ‘Wow, this so cool. Guys, we gotta go for a drink. This is amazing, this has never happened to me before where there’s more than five people who are redheads in one room.’”

If Leslie looks familiar it’s because she previously held the role of Gwen on Downton Abbey. She says that probably didn’t hurt her chances of landing the gig on Game of Thrones.

“I definitely think it opened doors for me and what was so fantastic about Downton being showed over in the states, was that it helped get me noticed and I know that [Game of Thrones executive producer] David Benioff actually mentioned it to me, I think it was on my first kind of audition going for Ygritte,” she said. “He was like, ‘We’ve seen you in Downton Abbey and we like the whole like Northern accents thing.’ And I [thought], ‘Oh! Great! Well, obviously that was working in my favor.’ So, yeah… I definitely think it helped me, which is lovely.”

Leslie said she “jumped for joy” when she found out she got the role and couldn’t believe it at first. “My brothers and sisters actually kind of freaked out more, because my brothers are big fans of the show,” she said. “They’re huge kind of fantasy fans anyway, so they were really, really excited for me. They didn’t believe me at first. They’re like, ‘You’re lying.’ I was like, ‘No, I promise you I’m not.’”

Kit Harington, who plays Jon Snow on the series, called Leslie’s work “amazing,” and he would know, as they get to spend a lot of time together during filming. “It’s a tempestuous relationship,” he said of their characters. “I’m not allowed to go into details. But I will say that it’s nice for Jon to meet a woman.”

Although they weren’t sharing any plot details, Leslie did have this to say about the character. “Because Ygritte is a wildling… what really struck a chord with me, what I loved about her, was her independence and her ruthlessness. She is tough,” she said. “She has lived in this difficult terrain all her life and you know, she’s very kind of strong willed and I suppose I love that about her. And she bites back. In the scenes Jon Snow and I have, she doesn’t let him kind of have one up on her, she bites back and she fights, which is great.”

Access Hollywood mentioned people would get to see another strong female character when Ygritte shows up tonight and Leslie replied, “To add to the pile. I couldn’t agree more.”