Game of Thrones Recap: The Ghost of Harrenhal | The Mary Sue

Game Of Thrones Recap: The Ghost of Harrenhal 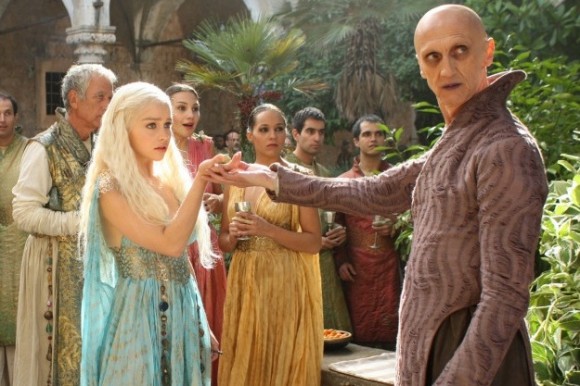 Editor’s Note: HBO’s Game of Thrones is kicking into high gear with episode five. We started to see some crazy stuff last week which, in turn, led to even crazier stuff this week. Find out what Amy Ratcliffe thought about this week’s episode as well as some thoughts on how things are changing from George R.R. Martin’s novels. Read on and let us know how you felt about it all in the comments!

(Spoilers ahead of course, book talk is at the very end if you want to avoid it. Don’t forget to catch up with last week’s recap if you missed it!)

Remember that quote of Arya’s from trailers for this season? “Anyone can die.” Last night’s The Ghost of Harrenhal proved again that no character in Westeros is safe. And it did so right off the bat.

At Storm’s End, Renly offers terms to Catelyn. They’re actually reasonable, too. Robb can be King in the North if he swears fealty. But remember that disturbing shadow baby birthed last week by Melisandre? Well, it’s all grown up and it enters the tent and slays Renly. Brienne is heartbroken and when knights come in and try to apprehend her, thinking she’s the culprit, she cuts them down. Have I mentioned I couldn’t imagine a more perfect Brienne than Gwendoline Christie? She flipped from sorrow to rage to confusion without a bump. Catelyn is able to convince her to leave before more men show up. She cautions Brienne, “You can’t avenge him if you are dead.”

They aren’t the only ones fleeing camp. Littlefinger advises Loras and Margaery Tyrell to do the same. Loras is angry – he loved Renly more than Brienne – but his sister echoes Catelyn and says, “you can’t avenge him from the grave.” It draws an interesting parallel between the two pairs. Before they decided to take leave, Littlefinger elicits Margaery’s true intentions: she doesn’t want to be a queen, she wants to be the Queen. Interesting.

Stannis doesn’t seem the least bit shaken up about his brother’s death. Even though they were at war and Stannis was behind it, I would have expected to see a little remorse. Just a teensy bit. There’s nothing though. He’s focused only on winning the throne, and the next step is sending ships against King’s Landing. One reason Stannis keeps Davos around is for hard truths, and the Onion Knight delivers. The shocking part? Stannis listens to Davos’ council about not taking Lady Melisandre to King’s Landing. She’s a foreigner, and it wouldn’t be good if it looked like it was her victory. Smart guy, that Davos.

In King’s Landing, Tyrion can smell that’s something afoot. Of course, Cersei refuses to give him answers. So in a delightful scene, he tortures Lancel with words and threats. He learns Cersei is having the pyromancers create thousands of pots of wildfire, and she plans to launch them from the city walls. Wildfire can even burn through steel. The always astute Bronn points out a problem: it might defeat the incoming army, but it’s also likely to set King’s Landing ablaze. He had a bit of a Han Solo moment (yeah, I’m going to keep making comparisons to Star Wars whenever possible). He tells the pyromancer, “Men win wars, not magic tricks.” Wait until he hears about the shadow baby!

Over in Harrenhal, Tywin does a crazy thing. He admits he’s underestimated Robb Stark. Actually, it’s not so nutty. Tywin doesn’t seem the type to me to shy away from admitting when he’s been bettered. I know he’s a tool, but there are times when I respect him. When he sends Arya (who he knows is from the North) on an errand, she runs into a friend from the road to Castle Black: Jaqen H’ghar. She released him and his fellow prisoners from the cage and thus saved them from fire and death.

He tells her since she saved three men from the Red God, now the Red God needs three deaths. He will kill any three men she names. She chooses the Tickler, and she chooses quickly. I certainly see why she wants him dead, but it’s not the most strategic choice. Jaqen delivers, too. As with pretty much every other character, Tom Wlaschiha is a great choice to play the part of Jaqen. 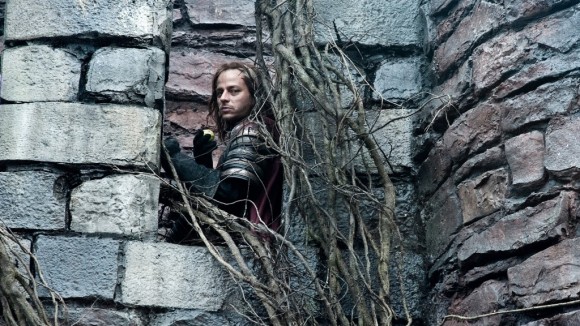 I dislike Theon as much as I like Jaqen. He continues to be a smarmy jerk. None of his crew respect him, so after a nudge from his first mate to man up (more or less), he hatches a plan. He’ll attack Torrhen Square, and Winterfell will send its men to turn them away. That will leave Winterfell wide open. The attack happens, and up in the North, Bran does indeed send Rodrik and his men to Torrhen Square. Bran also has a dream that hints at an ominous future for those at Winterfell. He sees the sea pouring into Winterfell and flooding it despite it being hundreds of miles away.

North of the Wall, the brothers of the Night’s Watch push through the frozen lands to find Qhorin Halfhand and an ancient fortress of sorts, the Fist of the First Men. When Halfhand arrives, he tells them the Wildlings are following Mance Rayder and they’re preparing to go to war. He also reveals that Mance used to be a brother of the Watch. He plans to take a small team to go into the camp and kill Mance; he hopes it will make the Wildlings disperse. I think that’s a little naive. Jon volunteers to go with Qhorin, but you don’t really get a feel for why. To prove himself? To get out of preparing Lord Mormont’s meals? Mormont is pretty particular about his spiced wine. Whatever the reason, Qhorin agrees to add him to the team and Mormont gives his blessing.

Across the Narrow Sea in Qarth – make sure you pronounce it correctly – Dany is being doted upon by her host with fine gowns and fancy parties. She even receives an invite to the House of the Undying by Pyat Pree. It’s not too surprising that all of this is to woo her. Xaro shows off his wealth and asks for her hand in marriage. He knows she needs ships and men to invade Westeros; she wants the Iron Throne more than anything. You can tell Dany is tempted by the offer, too. Jorah strongly councils against it and speaks passionately about why she should be on the throne but that this isn’t the way to gain it. Dany sees what Xaro had to point out to her – Jorah loves her.

One final scene that I can’t skip: after Catelyn and Brienne are well on their way, Brienne brings up revenge again. Catelyn cautions her to wait, and Brienne offers to serve her as long as Cat doesn’t stand in her way when the time comes to bring down Stannis. It was just like the book, and it was an honest and moving scene.

After the slap-you-in-the-face beginning, I feel that the rest of the episode was more moving pawns into place. Done wrong, that can be boring. They played it just right though, revealing some secrets along the way and adding some twists to keep it interesting. I enjoy the heck out of little things like the way Bran and Osha interact, when Arya gives sword fighting tips to Gendry, and just how well every character is cast. Some of my favorite scenes from season one were just Varys and Littlefinger talking. We got tons of those wonderful character interactions tonight, and that’s almost enough for me. Almost.

This episode varied in big and small ways from the book. Here are the points that stuck out for me: