Breathtaking New Image Of Galaxy M106 Is Incredible, May Teach Us a Thing or Two About Black Holes 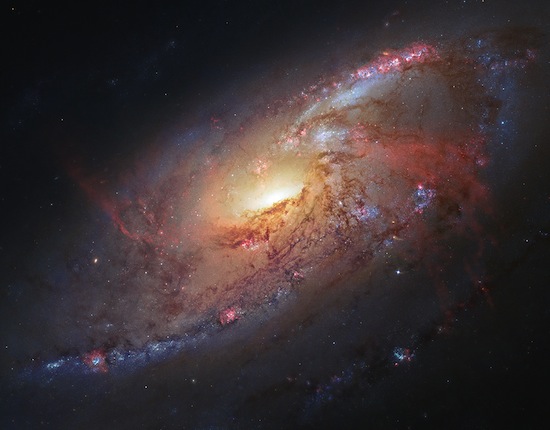 This new image of galaxy Messier 106 (M106), a spiral galaxy about 20 million light years from our own, is a mosaic assembling images from the Hubble space Telescope’s image archives and the libraries of amateur stargazers to produce a startlingly beautiful image that reveals some brand new information about the galaxy — for example, that this spiral galaxy has four arms, rather than the customary two.

The new mosaic image — assembled with the assistance of hobbyist space photographers Robert Gendler and Jay GaBany — reveals the two extra arms as wispy stream of gas here, though according to Hubble officials, the feature is more easily seen in x-ray images than with the naked eye. There are few clues as to what is behind the extra arms, though it could have something to do with the highly active black hole that composes the center of M106. Compared to the Milky Way’s own black hole, this one makes quite a light show, superheating the gas and dust it sucks in and firing off microwave radiation like an enormous space laser. Researchers suspect the power of the black hole may have helped to form the extra arms, which seem to be solely gaseous, rather than hosting the star-forming regions present in the main arms of the galaxy.

Want a bigger, better look at the Messier 106, though? No worries — check it out here.