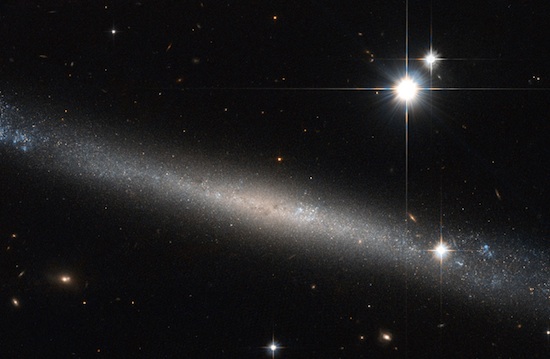 As a special Christmas gift to those of us who are still watching the skies on federally mandated holidays, NASA’s Hubble Space Telescope has snapped this great photo of galaxy IC 2233, one of the flattest galaxies known to astronomers. Where most spiral galaxies have a thick bulge of material towards their center, IC 2233 is instead a super-thin galaxy, looking almost like a flat plane of stars when viewed from the side.

Located about 140 million light years from Earth, IC 2233 is a great example of a super-thin galaxy, defined as a galaxy that is more than ten times as wide as it is thick. Rather than the typical agglomeration of stars at the center, super-thin galaxies have stars that are dispersed more or less evenly. That leaves super-thin galaxies looking like IC 2233 — a razor-thin, silver slash across the cosmic landscape.

These galaxies are known to exist here and there, but they are rare, and little is understood about how they form, or why they look so different from standard spiral galaxies. You can embiggen the image courtesy of NASA here.