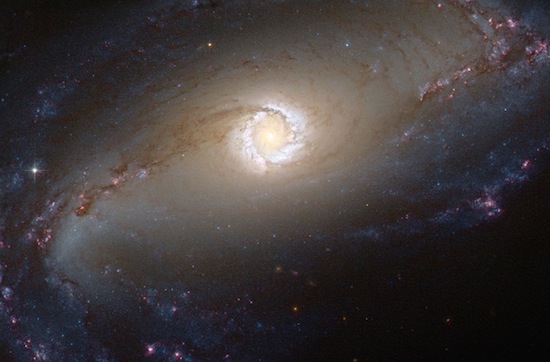 One of the most impressive things about the Hubble Space Telescope is the insight it has offered astronomers and physicists on the varieties of galactic design. The telescope has spotted elliptical and spiral galaxies; bulging, thick galaxies and galaxies so thing they are nearly two-dimensional; galaxies that are actively forming brand new stars and even galaxies where old stars are going supernova like firecrackers on a cosmic string. Pictured above, NGC 1097 is the last kind of galaxy, a nova factory that has seen at least three stars explode in just the last few years that researchers have had it under observation.

The less-than-catchily named NGC 1097 is about 45 million light years away from Earth, and sports a supermassive black hole about 100 million times as massive as our sun at its center. Though it may seem counterintuitive, that black hole is the bright spot in the middle of the above image of NGC 1097 — the matter being pulled into the black hole emits radiation, which Hubble sees as that shining galactic center. While researchers don’t understand what makes NGC 1097 so rich in stars that are ready to go supernova, they’re keeping an eye on the galaxy in an effort to find out what it may have to teach us about the life cycles of stars.

There’s one more interesting bit about NGC 1097 — in contrast to the way we’ll no doubt feel at the stroke of midnight this New Year, it’s not hurtling alone through a vast and uncaring cosmos with nothing to accompany it as t marches toward an end that is likely to be as beautiful as it is unmarked. Instead, the galaxy has two smaller galactic bodies  — NGC 1097A and NGC 1097B — accompanying it in a sort of galactic orbit. Though they can’t be seen in the above image, researchers suspect that at least NGC 1097 and NGC 1097A have directly interacted at some point in the past, though what the interaction consisted of — and the consequences it had for both galaxies — are not yet understood.