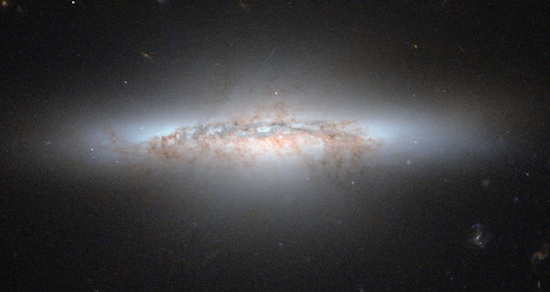 This is NGC 5010, a lenticular galaxy in the constellation Virgo and the latest to be discovered by the Hubble Space Telescope. While the red and yellow colors of NGC 5010 make it look vibrant and active, those looks are deceiving — the galaxy is mostly done forming stars, and with its best years behind it, is a great example of a galaxy transitioning from cosmic mid-life to old age.

As it ages, NGC 5010 is changing shape, moving from the spiral shape of young galaxies like our Milky Way to the less well-defined elliptical shape common in older galaxies. Much like men approaching a certain age, that transition is marked by a rounding of NGC 5010’s shape and a noticeable bulge towards the center of its mass. Don’t feel too bad, NGC 5010 — the inevitable ravages of time are felt by the best of us. Protip: You’re going to feel the urge to purchase a sweet cosmic sports car in the near future, though. Fight that urge.

Advancing age is also what gives NGC 5010 its reddish orange hue. Rather than younger blue stars that are still forming, the galaxy is filled with elderly red stars moving towards the end of their life spans. As it continues to use up its remaining celestial fuel, the galaxy will look more “red and dead” with the passage of time, finally moving into its final stage of life as an elliptical galaxy, shouting at younger galaxies to stay off of its lawn and wistfully remembering the good old days.

Of course, considering that will take place over the span of coming millennia, NGC 5010 will have throughly earned its twilight years of comfortable galactic retirement by that point.

(via NASA, image courtesy of NASA/ESA)