Hubble Telescope Discovers Seven Galaxies From The Dawn Of The Universe 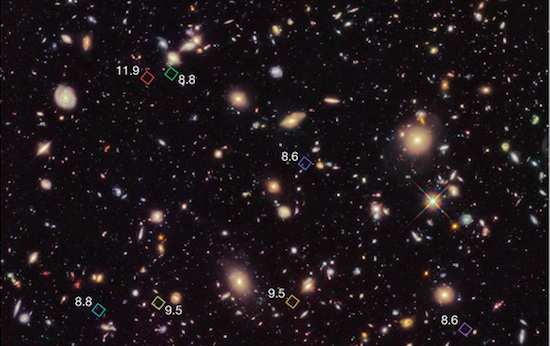 The Ultra Deep Field project of  Hubble Space Telescope just keeps making discoveries. Last month, it was the most distant galaxy in the universe, while today it is the discovery of no less than seven primitive galaxies that researchers think date back to the dawn of the universe itself. Which makes them, for those of you playing at home, pretty darn old.

The seven galaxies — including the most distant object we’ve yet found in the cosmos — could act as archaeological clues for astronomers, offering new insights into how galaxies formed at the beginning of the universe, and how that process may have changed over time. one of the heads of the project, Ross McClure of the University of Edinburgh, points out:

The results are on the preliminary side and still awaiting confirmation by independent observers. Of course, that clarification and confirmation is the whole point of the Ultra Deep Field project that spawned the new images. Distant galaxies are difficult to get clear images of  — and good data about — exactly because they are so distant. To determine how far away these objects are and how old they are, they have to rely on tricky measurements like red shift — which measures light wavelengths — to judge distance.

Consisting of six weeks worth of the most far out images the Hubble could capture earlier this year, the results of the Ultra Deep Field Project are being prepared by NASA scientists right now as they try to push them out the door and into the public eye later this year. By offering their research to any researchers who want to examine it, the UDF team hope to not only get a check on their own work, but provide others with the resources to do their own study on these new images.

(via Science 2.0, image courtesy of NASA/ESA)