Hubble Finds New Most Distant Object, Reminds Us the Universe is Still Enormous 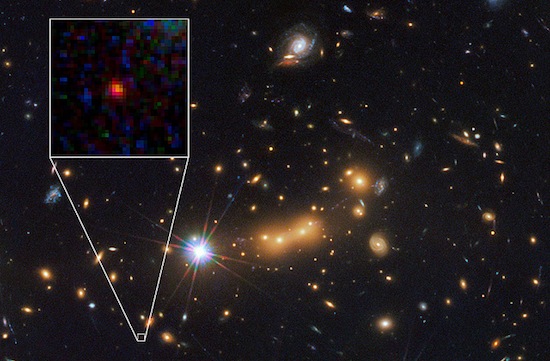 The universe is crazy big, everybody. How big? So big that the Hubble Telescope just found a new candidate for the title of Most Distant Object in the Universe. That object is MACS0647-JD, a galaxy far, far away. It’s so far away from us, in fact,  that we can’t even measure the distance in lightyears. Instead, we have to measure it in redshift, and this galaxy’s redshift goes all the way up to 11.

Redshift is pretty complicated, so we’ll just let the notes section of the Hubble press release announcing the discovery explain it.

Redshift is a consequence of the expansion of space over cosmic time, which stretches the wavelength of light. This has the consequence of making a distant object appear redder than it really is. Objects with a higher redshift have had their light stretched more, and are more distant.

The Hubble has been finding a lot of these Most Distant Objects lately. It was just last January that it discovered UDFj-39546284, a dim object believed to be a compact galaxy of blue stars. That object only had a redshift of about 10. That was really impressive back in the old days of 2011, but this is 2012. We’re not even getting out of bed for a redshift of less than 11.

MACS0647-JD won’t be able to officially claim its most distant object crown until the distance can be confirmed by another telescope. There’s only one small problem with that: None of the telescopes on Earth are powerful enough to confirm it. We’ll have to wait until the 2018 launch of the James Webb Space Telescope to be able to more accurately measure the distance.

The only reason the light from MACS0647-JD is visible at all is due to an effect called gravitational lensing. This uses the gravity of massive galaxy clusters to bend light and magnify the galaxies behind the clusters. Because of gravitational lensing, we aren’t observing light that has been traveling in a straight line. Instead, the light has been traveling for more than 13 billion years, being pulled by the gravity of unimaginably large clusters of galaxies to wind its way to the lens of Hubble.