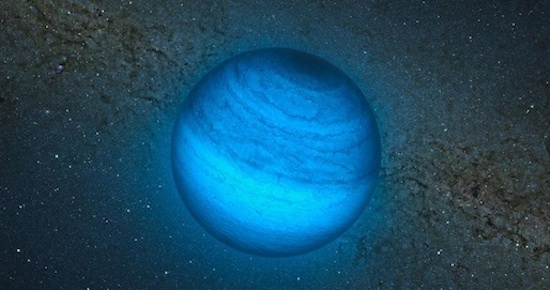 A team of astronomers at the University of Montreal has uncovered a cosmic first — a planet without a star to orbit. Though stargazing scientists have theorized the existence of planet-sized objects that don’t orbit any star for years, today’s announcement is the first confirmed sighting of a so-called “free-floating planet,” CFBDSIR2149, which meanders about a cluster of stars known as the AB Doradus Moving Group. While It wanders through this group of stars, though, it doesn’t call any of them home, seemingly preferring a life on the rails, not unlike some glorious space-hobo.

There have been other candidates for “free-floating planet” status in the past few years, but without solid data on the age and mass of these objects, astronomers have been unable to clearly define whether they are large planets or brown dwarf stars — small stars that, for whatever reason, fail to fully ignite. Working from data provided by the European Southern Observatory’s Very Large Telescope and the Canada-France-Hawaii Telescope, the University of Montreal team was finally able to pin down the pertinent measurements for CFBDSIR2149 and confirm that it is a planet, not a failed star.

The wandering planet is very young as far as planets go — between 50 and 120 million years old —  and is  a pretty big beast of a celestial body, with researchers estimating its mass to be somewhere between four and seven times the mass of Jupiter. Even at that enormous size, CFBDSIR2149 is still definitely a planet, falling well short of the 13 Jupiters worth of mass that would be necessary to classify it as a brown dwarf star.

The confirmation of this first wandering planet leaves researchers thinking that they might be more common than once thought, and the University of Montreal team is hopeful that they will find more objects like this in the future, as planets without home stars could offer valuable lessons on the ill-understood process of just how planets — and solar systems — take shape in the cosmos.