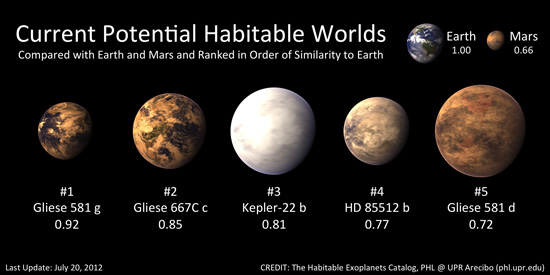 When we last checked in on the potential exoplanet Gliese 581 g, things were looking good for it to exist in the habitable “Goldilocks region” where liquid water can exist on the surface of a planet. Then, there were concerns that the rocky world might not exist at all. Now, the University of Puerto Rico at Arecibo has placed the planet at the top of its list of potentially habitable exoplanets.

The University uses the Earth Similarity Index (ESI) as a way of comparing distant worlds to our own. The scale is based on comparing radius, density, escape velocity, and surface temperature to Earth and assigning it a numerical value. Earth, or a planet exactly like Earth, has a score of 1.0. Planets with a score between 0.8 and 1.0 are rocky worlds capable of maintaining an atmosphere.

Using this scale, the maintainers of the Habitable Exoplanets Catalog have given Gliese 581 g a score of .92. Not too bad for a world 1.5 the size of our own planet and one that might be tidally locked — like the moon, always presenting the same face — to its red dwarf star sun.

The decision to include the planet came after new evidence from Steven S. Vogt, whose team originally discovered the planet. At issue was the nature of orbits in the Gliese system, which Vogt and his team believe are circular, as opposed to elliptical. This is a critical distinction that could either prove or disprove the planet’s existence. The new data apparently comes from further analysis of observations from the High Accuracy Radial velocity Planet Searcher or HARPS.

The University quotes Vogt as saying:

This signal has a False Alarm Probability of < 4% and is consistent with a planet of minimum mass 2.2M [Earth masses], orbiting squarely in the star’s Habitable Zone at 0.13 AU, where liquid water on planetary surfaces is a distinct possibility[.]

The debate about the viability of Gliese 581 g as a habitable world, let alone even existing, will likely continue for some time. What’s more, while the ESI number is encouraging, searching for an Earth-like world is only one way of finding a potentially habitable world. Titan, for instance, has some pretty un-Earth-like features like lakes of liquid methane, but may be capable of supporting life. Just not like life on Earth.

Still, it’s exciting to see a map of potentially life-supporting planets coming together. Now we just need to get a better look at some of these.