Herschel Space Observatory Discovers Two Galaxies Colliding With Each Other

So these galaxies are going to be the setting for all future Star Wars/Trek crossover fanfics now, right? 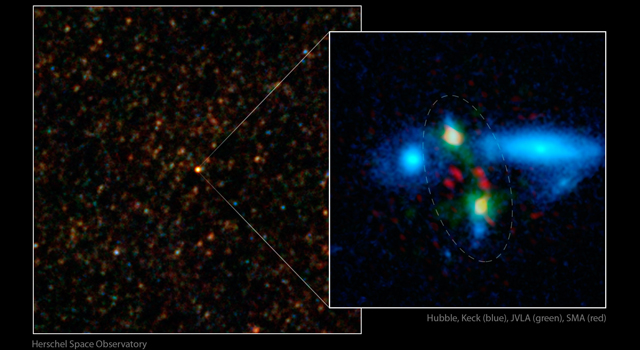 “Merger” is usually such a dull word. Companies merge. Lanes of traffic merge. But it’s not all bland and boring, because large galaxies can also merge with one another to form what is scientifically referred to as a “super-giant elliptical galaxy,” according to NASA — and apparently it’s happening right now. Or it did 11 billion years ago, at least. Light-years are weird, guys.

This event was first spotted by the Herschel Space Observatory, the European Space Agency funded infrared-telescope that ran out of liquid coolant in April. Astronomers at NASA’s Hershel Project Office found images of the merging galaxies in the data that the observatory collected, and follow up studies by the Hubble Space Telescope and Spitzer Space Telescope confirmed the findings.

The galaxies in question, now called HXMM01, are located approximately 11 billion light-years from Earth, meaning that they actually merged when our planet was only 3 billion years old and the light from that event is only just reaching us now. Trippy.

Mergers between cosmic entities actually aren’t all that uncommon in space, but this one is special because of just how mind-numbingly big it is. To put its size in perspective: Our Milky Way births about two to three new stars every year. These galaxies are cranking out 2,000 a year. Between the two, there are about 400 billion stars in total.

This merger is also of particular interest because it was previously thought that larger galaxies grew in size by acquiring smaller ones, but these galaxies were both fairly equal in size before they started to collide.

On a side note, we’ve decided that “super-giant elliptical galaxy” should be the name of the next album that the English rock band Muse puts out. It seems right up their alley.

Relevant to your interests: