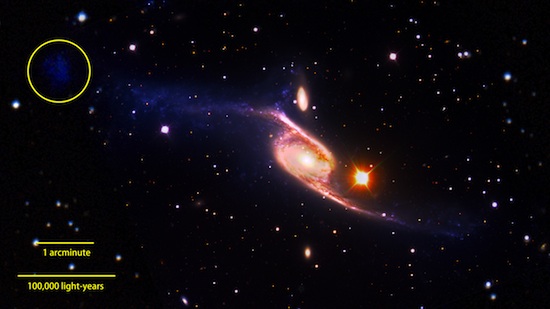 NASA and the European Southern Observatory (ESO) have put their heads — and their space telescope data — together to produce this image of NGC 6872, the largest known spiral galaxy in the universe. The gargantuan galaxy measures more than half-a-million light years from end to end — more than five times larger than our own Milky Way.

Alongside the enormous NGC 6872 is the smaller disc galaxy, IC 4790, which interacts closely with the larger spiral — a sort of cosmic Master to NGC 6872’s behemoth Blaster, to put it in the terms of the Thunderdome. Researchers believe the two galaxies may be interacting in unexpected ways to create what could be a new nascent galaxy in the area. That’s the dark blue, circled blotch in the upper left corner — a “tidal dwarf galaxy” that’s rife with newly forming stars and visible to us only on the ultraviolet spectrum.

The nascent galaxy could have started forming after a collision between NGC 6872 and IC 4790, one which astronomers think may have also jumpstarted star formation in NGC 6872 after it had once slowed, a collision researchers think looked something like the simulation below: 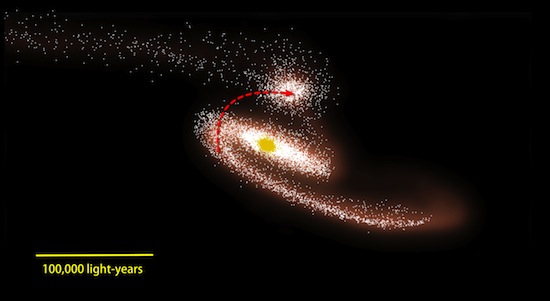 By continuing to combine visible light data from the ESO’s Very Large Telescope with ultraviolet and infrared data from NASA’a Spitzer telescope and GALEX program, astronomers hope to keep learning more about the way this odd couple of galaxies interacts, and what that interactions could teach us more generally about galactic formation.