Watch a Black Hole Feed on Its Planet-Sized Prey [Video] 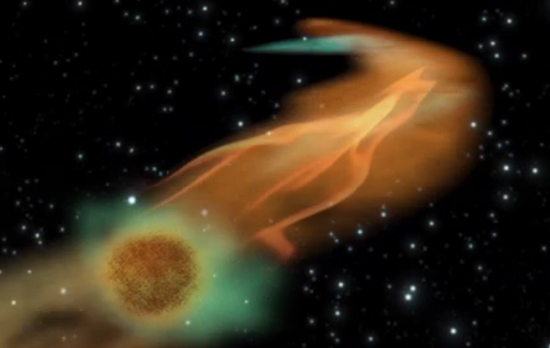 We were too far away to try to stop it. All we could do is watch, helpless, horrified, and secretly delighted, as the event unfolded beyond our reach. The crime: A black hole 47 million light years away, after stirred from its dormancy, fed on a planet-like object that could have had up to 30 times the mass of Jupiter. That’s one hungry light-sucking hole!

It happened in galaxy NGC 4845, presumably in a bid to remind us that it was still there, and astronomers first caught the view through the INTEGRAL, the European Space Agency’s Earth (ESA) satellite. An X-ray flare caught their attention while they were looking elsewhere, and they confirmed the identity of the previously silent galaxy with the help of other orbiting observatories and satellites.

Marek Nikolajuk of the University of Bialystok in Poland, lead author of the paper in Astronomy & Astrophysics, said, “The observation was completely unexpected, from a galaxy that has been quiet for at least 20-30 years.”

Analyzing the characteristics of the flare, the astronomers determined that it came from the wreath of material around NGC 4845’s central black hole. The object being devoured, believed to be a brown dwarf, was said to have between 14 and 30 times the mass of Jupiter.

Now check out the video. All that’s missing is some ominous sci-fi musical accompaniment.

Other studies have suggested that planetary-mass objects like this are not uncommon, floating around galaxies after being cast away from their parent solar systems by “gravitational interactions.” Subject to black hole seduction.

And as for the black hole itself, they believe it’s got a mass of around 300,000 times that of our own Sun. That’s one big mother. Creepily, ESA described it in even more zoomorphic terms:

It also likes to play with its food: the way the emission brightened and decayed shows there was a delay of 2-3 months between the object being disrupted and the heating of the debris in the vicinity of the black hole.

Roland Walter of the Observatory of Geneva, a co-author of the paper, indicated that the black hole’s “food” wasn’t entirely devoured:

“We estimate that only its external layers were eaten by the black hole, amounting to about 10% of the object’s total mass, and that a denser core has been left orbiting the black hole.”

Another feeding is expected to occur soon, this time in the center of our Milky Way — much closer to home! A dense cloud of gas with more mass than the Earth is already caught in the X-ray siren song of a supermassive black hole.