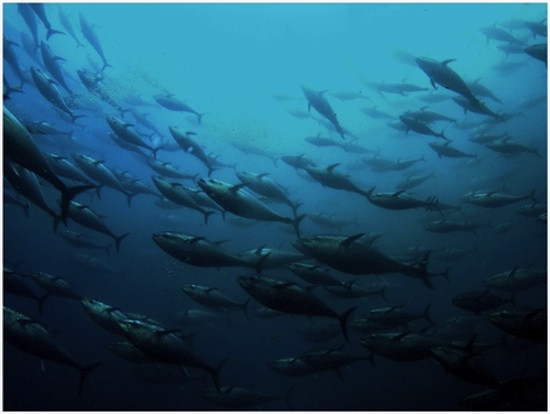 A team of researchers is making the best of a bad situation and trying to use the lasting effects of radiation at Japan’s Fukushima nuclear reactor to help environmental conservation efforts. In the years since the meltdown, marine biologists have found traces of radiation from the meltdown in bluefin tuna as far afield as California. That radiation, though, could help marine biologists map the ill-understood migration routes of the tuna. That better understanding of the life cycle and habits of the bluefin could be brought to bear in efforts to protect the valuable food fish from overfishing, a growing concern for pretty much every tuna species.

Since the tuna are born near Japan, fish that are a couple of years old today spent their formative years in Japanese waters. While there, they picked up trac amounts of the radioactive isotopes cesium-134 and cesium-137. While these trace amounts of radiation aren’t dangerous — they’re found in lower levels than normal background radiation for the fish — they do provide a sort of nuclear fingerprint for Fukushima radiation.

When the fish, which migrate from Japan to the coast of California and back again, make their return to radioactive waters, they get another teeny, tiny taste of radiation. The team studying the fish movements reports in the journal Environmental Science & Technology that measuring ratios of the isotopes could offer new insights into the pace and route of the tuna’s travels.

That information is especially important for lovers of fine seafood. While the bluefin isn’t endangered, stocks of the fish continue to drop dramatically due to overfishing. Getting a better grip on its life underwater has the potential to help researchers work together with fishermen to determine fishing seasons and set off limits areas that may help the fish replenish its numbers, ensuring that we’re not the last generation to enjoy a fine cut of bluefin sushi.