You Won’t Believe What Built This Underwater Crop Circle 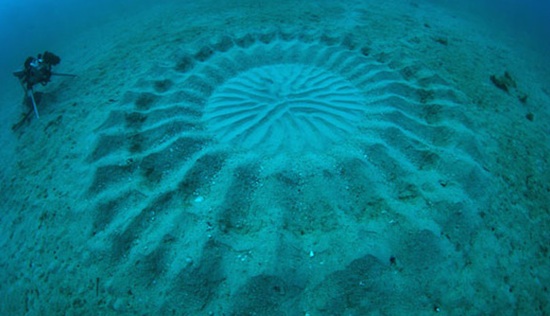 This is an underwater structure built about 80 feet underwater off the coast of the southern Japanese island of Anami Oshima. Considering no one had ever encountered anything like it, diver and underwater photographer Yoji Ookata was at a loss to explain what had built the circular, repeating, and clearly geometric structure. The architects of this feat of underwater engineering were discovered by Japanese broadcaster NHK, and the answer to what built the six and a half foot wide structure is at once mundane and really impressive.

The builder, it turns out, was a single ordinary — but exceptionally hard-working — pufferfish.

A film crew from NHK staked out this bizarre creation only to find that the entire structure was carved out by a single male pufferfish, tirelessly swinging his fin in the sand to create the grooves and ridges of the structure, which is many times the size of his own body. They also found that beyond just carving out the repeating shapes, he was also decorating the structure as he built it, peppering it with small stones and seashells.

Why would a pufferfish go through with all this trouble, you ask? Well, for the same, arguably one and only reason males of any species do anything ever — to attract a mate.

The structure, as striking and alien as it may look, especially beneath the surface of the waves, is actually a stunningly pragmatic one, acting as both love nest and nursery for the pufferfish. Females are drawn to the structures, where they mate with the males and leave their fertilized eggs behind. That’s when it becomes clear that those ridges aren’t just for beautifying the neighborhood. They serve as buffers to the ocean currents, making sure the newly fertilized eggs stay in one place. Researchers hypothesize that the shells the puffer brings to the structure may also be more than decorative, and could provide nutrition for the developing eggs.

So that’s your “nature is pretty surprising and beautiful sometimes” reminder of the day. Oh, and here’s that shot of the pufferfish nest at night, because, man, we can’t finish this without showing it to you. 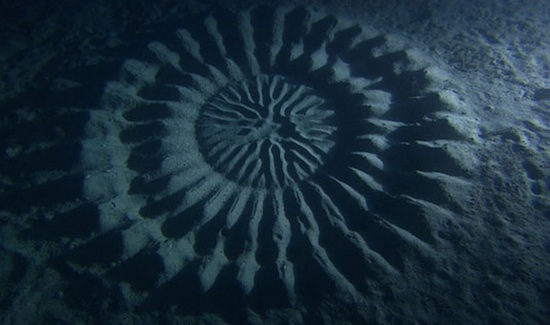