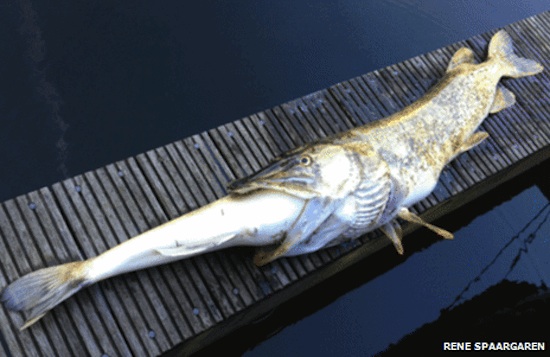 With the holidays still fresh in our mental rearview mirrors, most of us have some fairly fresh memories of sitting down to meals so big we had no business trying to consume them. All of our piled plates have nothing on this pike, though, which died in a valiant, if misguided, attempt to consume an entire zander — a fish almost as big as the pike itself.

The grisly and awkward scene comes to us courtesy of fisherman Rene Spaargaren, who found the two fish locked together and floating in the water near his home. Due to its size and length, the zander is often known as a “pike-perch” as it resembles a hybrid of the two fish, though its related to neither. The zander is a common game fish in Europe — similar to a walleye here in the U.S. —  but it’s not regular prey for pike.

From this photograph, we now know why.

While pike have a deserved reputation as voracious predators that will eat pretty much anything they can swallow, its hard to think what might have led this particular pike to believe it could have swallowed a fish as large as it was. Once it knew well enough to regret its decision, though, it would have been too late.

The backward facing teeth of the pike help it to keep prey in its mouth, but they backfired this time — with its teeth hooking the zander, the pike was unable to release its catch, even after what must have been the troubling realization that it had bitten off more than it could chew, and was, in fact, going to drown, which has to be most embarrassing way to go if you’re a fish.

The question that’s really on our minds, though, is whether the zander that died in the pike’s mouth also mad another fish in its grasp, making for a potentially delicious and ready made piscine answer to the turducken. Because we would eat that, like, right now.