Test Animation For Aliens RPG Shows Us What Could Have Been 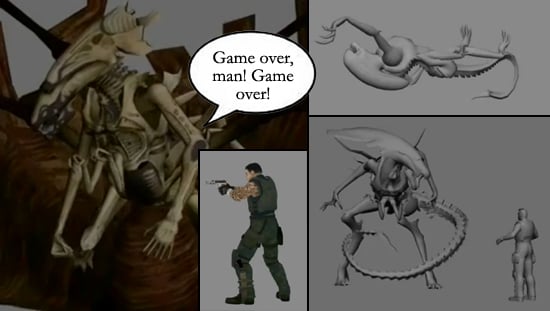 It was hard enough to hear that an Aliens-based RPG was in production and was subsequently canned. Now, they’re rubbing salt in our wounds — or bursting Xenomorphs out of our chests? — by showing us some animations of the eponymous aliens themselves that will never be, therefore proving that the game would have been awesome and that you should be sad. Have a look and mourn with us over a world we’ll never get to see.

Obsidian Entertainment (Star Wars: Knights of the Old Republic II, Project Eternity, Neverwinter Nights, etc.), backed by SEGA, was going to deliver this slice of outer space delight, evidently to be called Aliens: Crucible. But the game was canned for vague reasons. “[T]o take a step back and carefully consider the type of game we want to release,” they said. Right, that.

Yet look at what Crucible might have looked like. One of the game’s animators posted this sampling on Vimeo.

Xenomorphs, crawling along invisible ceilings and showing up their tail-whipping talents. Doomed, handgun-wielding humans. A rainbow-backed… dancing queen? All of which we’ll never see as intended. We wish animator Danny Garnett, now with Sony, well in any case.

So sadly, no role-playing game came of this. But if you still want to take on Facehuggers and Chestbursters, search for Ellen Ripley, or just indulge in some all-around pulse rifle action, there is Aliens: Colonial Marines, the latest SEGA-backed first-person shooter set in the Alien universe. You get to be a space marine. That’s right, I said it. A space marine! The game is selling like hotcakes, even though critical reception has been… well, frosty would be putting it generously.

(Via EuroGamer, image courtesy of SEGA)