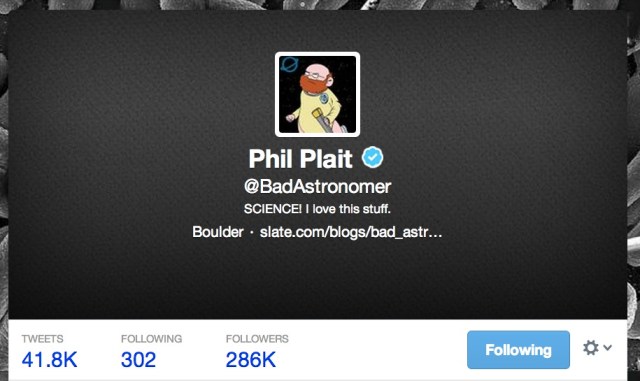 It’s Friday and Twitter is still a thing, so we’re going to tell you who to follow. This week we’d like to point you towards science lover Phil Plait (@badastronomer) for some fun science times.

Plait blogs about science for Slate, and he’s hands down our favorite thing about that site. He comes up in Geekosystem stories occasionally, and in Geekosystem conversation on the regular. We may have a bit of a science crush on him. So much so that we’re surprised it’s taken us this long to make him our #FollowFriday pick. Actually if you read last week’s #FollowFriday post it seems we thought we had.

I come to praseodymium Caeser, not to barium.

Obviously, that pun is great, but he also does math jokes:

He also does a great job keeping you up to date on climate change news.

Global warming is melting older Arctic ice, and it’s taking the rest of the ice with it. http://t.co/zlJiZWJCl7 — Phil Plait (@BadAstronomer) February 20, 2014

He really put the Facebook/WhatsApp acquisition into perspective.

Wait. *How many* Mars rovers could we get for what FB paid for WhatsApp? http://t.co/DJC9mxOrcS

So go forth, happy tweeter and check out Phil Plait. He is Grait.