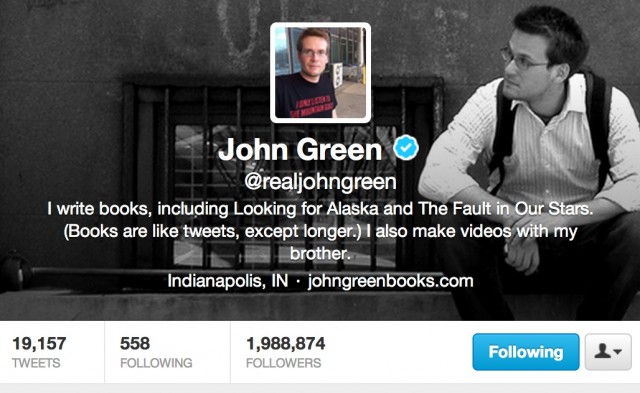 It’s that time again, Internet. It’s the day when we jump in on the glorious Twitter tradition of #FollowFriday and recommend an account we think you should be following. This week that account belongs to author/vlogger/nerdfighter(not someone who fights nerds) John Green.

John Green is the author of the wonderful Looking for Alaska and The Fault in Our Stars. (Says so right there in his Twitter bio!) But we know him more as the host of the great list videos Mental Floss puts out as well as his ongoing Vlog Brothers series with his brother Hank Green (who you could also follow on Twitter).

When he’s not writing books or making videos, John is also a nerdfighter. What is a nerdfighter? Despite the name it is not someone who fights nerds, nor is it a nerd that fights. It’s a little difficult to explain, so I’ll let John and his brother Hank explain for me:

Basically, John Green is awesome, and that’s why you should follow him.

This isn’t explicitly about Flowers in the Attic, but…

Currently amending my will to specifically state that Lifetime shall never be allowed to adapt one of my books into a movie.

Tumblr is down. I repeat: There is no tumblr. WHERE WILL I GET MY WHOLOCK GIFS? Don’t panic. NO ONE PANIC. #panic

John Green likes sports, but when he wants to live tweet a sports eventgamematch he does it from a separate account like a gentleman, and for this we thank him.

I’ll be livetweeting the game between my hometown Indianapolis Colts and the New Suckland Sucktriots @sportswithjohn. (Note: I curse there.)

My best friend @wategi to my wife just now: “Aren’t you glad you married Guy Who Eats Cake With His Bare Hands?”

Besides his own tweets, John is an excellent curator of links and retweets you will probably find interesting. By following him you’ll probably also find a lot of other great accounts to follow. So be awesome. Follow John Green @realjohngreen and help fight world suck.