How to Follow the 2014 Chess Olympiad in Tromsø, Norway (Without Being in Norway)

Does anyone speak Norwegian? 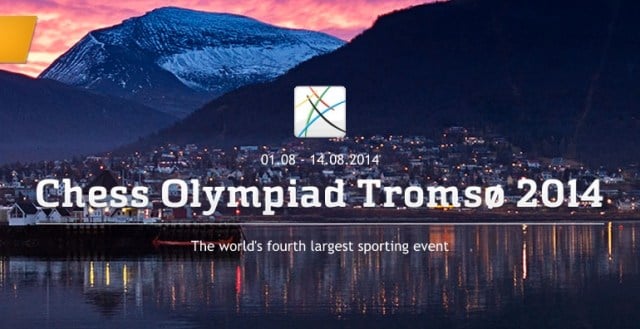 UPDATE: You can watch Round 1 live with commentary right here.

Today the 2014 Chess Olympiad in Tromsø, Norway kicks off with the opening ceremony at 1:30PM ET. This is where you can see all the coverage we can put together for the entire event including games (which start August 2nd), interviews, and tweets from the chess community in Tromsø.

Susan Polgar is providing coverage through the official Tromsø Olympiad YouTube channel. In this video, she greets players like Magnus Carlsen at the airport to talk about the event:

Speaking of the airport, the top-rated player on the US team, GM Hikaru Nakamura has been tweeting about flight delays. It looks like he won’t be able to get to the tournament until at least the third round. That’s potentially a huge blow to the US team. If any readers have access to a jet and would like to the US win, maybe go pick him up and get him to Norway. We’re sure he’d appreciate it.

We’ll be growing the list as we follow the event and find more accounts, but there’s also the official hashtag #ChessOlympiad. Below are all the tweets using it.

Norway’s NRK TV will be covering the event, but they’re geo blocked and are preventing the video from playing outside of Norway. We’re working on finding a livestream elsewhere, but if you happen to be in Norway or know how to get around geo blocking, you should be able to watch most of the action there.

As for the games themselves, if they’re not being livestreamed, you can at least follow along with a look at the live boards through ChessArena, which lets you click through to different matches and see statistics like current rankings, wins by color, and more.

Here’s the embed for the Open event. (It’s incorrectly identified as the “Men’s” event in the embed. It is open to all players. We know of at least one woman, Judith Polgar, who is playing in the Open event for the Hungarian team. She’s the top-rated woman in the world and 66th overall. She’s no one to be trifled with.)

And here’s the embed for the Women’s event:

In both cases, we’ve chosen to select the embed code for the “Top” games based on assumed preference, but ChessArena has additional embeds for “other boards” and “alternative” for both the Open and the Women’s events.

We’ll be updating this post throughout the event with any additional coverage we can provide.

Previously in chess and chess-related news