Watch Round 1 of the 2014 Chess Olympiad in Tromsø, Norway Live Right Here

Round 1 of the 2014 Chess Olympiad in Tromsø is a little less than an hour away. Play begins at 10:00AM ET and they’ll be live streaming the event with expert commentary by IM Lawrence Trent and GM Jan Gustafsson. Watch it all right here.

If you also want to follow along with the action on the board of a game Trent and Gustafsson aren’t talking about at any given time, you can follow the boards for all the top games below.

Of course, judging from the official Olympiad page over on Chess24 it looks like at least one of the first matches is going to be a little one-side: 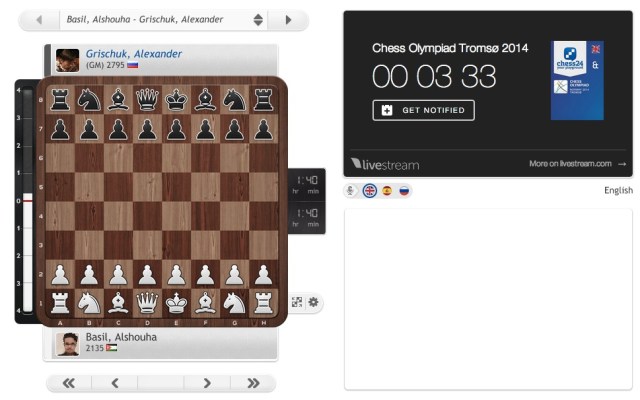 Alshouha Basil of Jordan is rated 2135 and will face off against Russian GM Alexander Grischuk with a rating of 2795. That’s just one of many games going on. For the full list you can check out the Chess-Results.com page. It allows you search a number of parameters to find exactly the games you want.