Magnus Carlsen is the First Man to Win the Chess Triple Crown, but Not the First Person

Let's not forget about Susan Polgar! 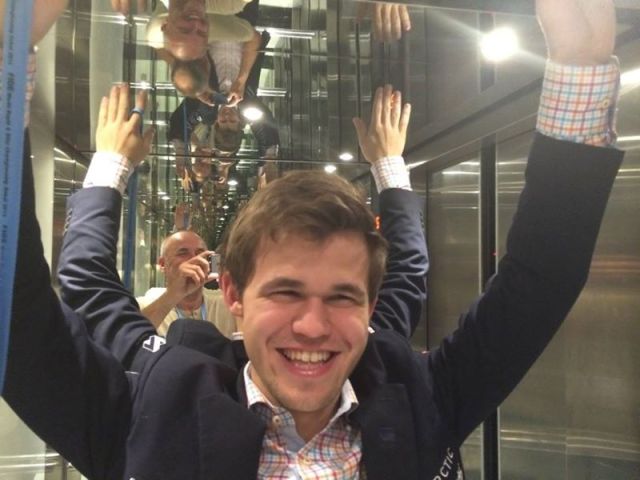 It’s a big day for chess nerds! World Champion Magnus Carlsen just took the Chess Triple Crown by holding the World Blitz, Rapid, and Classic titles consecutively. I’ve seen some reports that Carlsen is the first player in history to ever pull this off, but he’s not. Susan Polgar did it back in 1996.

The photo above was taken from Carlsen’s Facebook page along with the caption:

After many tough games and hard work, I am honoured to hold the classic, rapid and blitz World Championship titles. Thank you for another memorable time in Dubai and congratulations to all the other players. #WRB2014

It appears to have been taken and posted shortly after Carlsen won the Blitz title earlier today. He won the Rapid title earlier this month, and of course took the World Championship from Viswanathan Anand last year. Carlsen did previously hold the Blitz title back in 2009, but this is the first time he’s held all three together.

There are some distinctions to be made here between Carlsen’s newly minted Triple Crown and Polgar’s. First, Polgar won FIDE’s Women’s World Blitz, Rapid, and Classic titles while Carlsen won the Men’s. Also, Carlsen won all three titles in one 12-month period, while Polgar held her titles concurrently, but won them in different years.

According to ESPN Radio’s Matt Markus the term “Triple Crown” originated in England in the mid-19th century, and not only would a horse have to win all three races in the Triple Crown series, they have to be won in the same year. That’s because to run the races at all the horses have to be three years old for some kind of horse reason.

Polgar’s not winning the three titles in the same year is no reflection of her talent as a player. FIDE simply didn’t host annual Women’s Blitz, Rapid, and Classical tournaments at the time, meaning the opportunity to win all three titles in the same year just didn’t exist. Polgar won the Blitz and Rapid titles in 1992 and did not have to defend them until after she won the Classic title in her second attempt in 1996. That’s when she became the first chess player in the world to hold all three world titles consecutively, fairly making her the first player to hold a chess Triple Crown.

Although it certainly seems that Polgar is happy for Carlsen and his victory. In an email she told me, “Magnus got all 3 within 12 months. That’s impressive! It was not easy but he was clutch and deserved it.”

Of course it’s a major accomplishment for Carlsen, and it’s 100% worth celebrating — let’s just not ignore that his isn’t the only Chess Triple Crown out there.