I assume it includes instructions on how to drive over to Mum's and "take care" of Phillip. 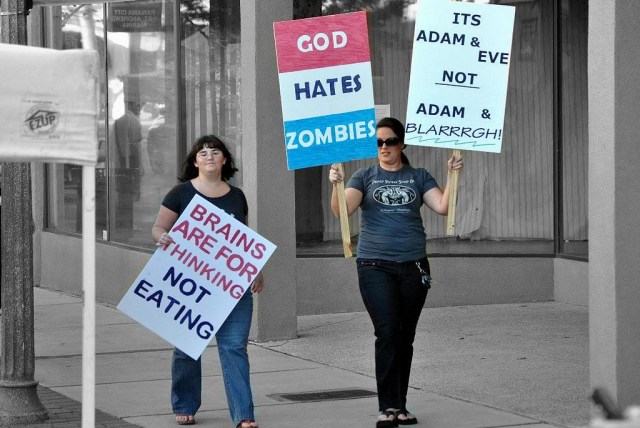 There are hordes of undead monsters coming for your delicious brains. Where did they all come from? Who do you blame? Right: Florida. So, a Florida State Senator has added language to an existing bill that makes provisions to include a zombie apocalypse. That’s good. The first step is admitting you have a problem.

State Senator Dwight Bullard took it upon himself to make sure that a Florida bill introduced in 2010 was properly updated to fit the needs of his constituents. Where the original bill only made provisions for passé states of emergency like floods and hurricanes, Bullard wanted to make sure it was a bit more comprehensive.

The original bill, which allowed citizens who own firearms automatic concealed carry privileges in an emergency, began, “An act related to carrying a concealed weapon or firearm.” That is, until Bullard introduced this amendment on Tuesday:

An act relating to the zombie apocalypse; amending s.

At first glance, this modernization of the bill sounds like par for the course and just good sense for Florida, but I’m actually kind of on board with Bullard’s real, snarky motives. He explained to the Huffington Post:

For me, as laughable as the amendment might seem, it’s equally laughable that people who haven’t gone through the proper training, the background check, the license to carry—we’re saying because of a hurricane or flooding or sinkhole, these individuals have gone from gun owners to concealed carry permit holders.

So, Bullard has succeeded in creating the most sarcastic use of the zombie apocalypse since Shaun of the Dead. Well done, sir. Now, you can just get to the Winchester, have a nice cold pint, and wait for all of this to blow over.

(via Daily Dot and Huffington Post, image via Kim Hill)