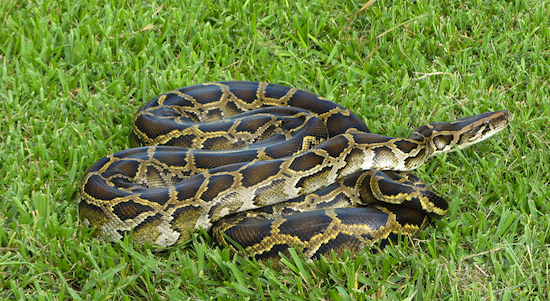 It’s starting to look like it’s possible that Florida’s much-ballyhooed invasion by ravening hordes of Burmese pythons may have been a bit overblown. While officials cry out that hundreds of thousand the animals are invading the state, turning places like the Everglades into nothing more than enormous python spas, a month long python hunt in the state just came to a close telling a different story. 30 days of hunting by as many as 1,500 people registered snake hunters out to bag the most pythons netted an unexpectedly low total catch — just 50 snakes.

Now, a low catch doesn’t necessarily mean there aren’t hundreds of thousands of these constricting serpents roaming the wilds of Florida. As good as it was as a publicity stunt, the snake hunt left a lot to be desired from a hunter’s perspective.

Warm weather meant the snakes could stay toasty without leaving heir homes or going out in the open, while snake hunters were left slogging through swamps in 80 degree heat looking for snakes that couldn’t be bothered to get out of bed. As for the Everglades themselves? The area, which many think hosts a huge number of the invasive pythons, remained off limits to hunters, who were restricted in their tactics, allowed only to kill the snakes with a bullet or machete strike to the head.

Then again, the fact is, a catch number that low makes it hard to take the official story of a massive snake invasion very seriously. We don’t have any doubt that pythons are a growing concern for Florida’s ecosystem. The question now, though, is twofold: just how concerned should we be, and how will the low hunt numbers affect public perception of the python problem. In the end, while the data collected may be valuable to researchers, and the snakes killed represent 50 less invasive predators doing a number on native wildlife, it remains to be seen how the hunt — and the less than sterling results it produced — will affect the snake situation in Florida.