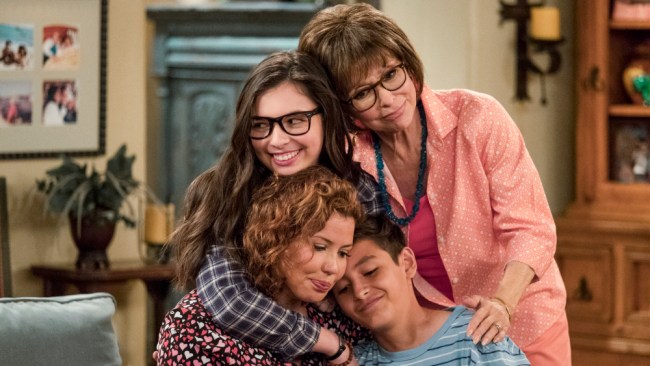 (l-r from top): Isabella Gomez, Rita Moreno, Marcel Ruiz, and Justina Machado on “One Day at a Time”

I’ve been a huge fan of Netflix’s reboot of the classic Norman Lear sitcom One Day at a Time since its first season. However in the back of my mind, I worried about something that I think everyone worries about when they love something right out of the gate: the Sophomore Slump. Thankfully, I had no need to worry. Season Two of the show recently launched on Netflix, and it improved on an already stellar first season.

Here are five reasons why you should be watching: 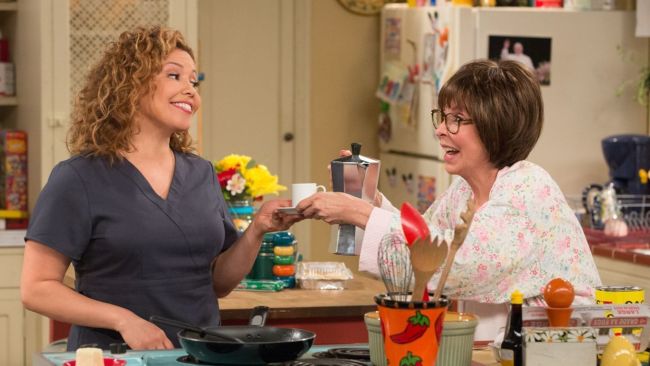 Two of television’s best performances right now aren’t happening on broadcast or cable. They’re happening on this little comedy on Netflix, and they happen to be coming from two powerhouse Latinas. You’ll notice that I didn’t say “best comedic performances,” either. I said “best performances,” because this season, while always hilarious, was also unexpectedly dramatic and harrowing in places, as the show treated each of its characters like a fully fleshed-out human being with a full range of life happening to them.

The entire cast was stellar this season, but special props have to go to the show’s two matriarchs.

Of course, there’s Hollywood legend, Rita Moreno, who in Lydia Margarita del Carmen Inclan Maribona Leytevidal de Riera has created one of television’s most wonderful and nuanced Latina characters ever. On the one hand, yes she is absolutely the old-school Latina mother and grandmother in the ways you might expect: constantly crossing herself and equally as devoted to being Cuban as she is to God, heavily accented, and believing that there’s no bigger problem for a woman than not finding “a good man.”

However, she is also very proudly sexual and not shy at all about reliving the sexcapades she had with her beloved Berto before he passed away, sometimes in uncomfortably vivid detail. She’s also willing to learn, embrace new ideas. Lydia was completely accepting of her granddaughter Elena (Isabella Gomez) when she came out as a lesbian at the end of Season One, and in Season Two, she quickly picks up the idea of non-binary gender identities (even if it takes a “Who’s On First”-like routine to get her there). Over the course of the season, she releases even more of the past, and in her seventies learns how to pave an entirely new future for herself. Watching Moreno navigate that journey with grace, hilarity, and depth was a complete joy.

But the season MVP has to go to the brilliant Justina Machado, whose Penelope (or Lupe) had a lot to deal with this season, from new love, to her continuing battle with mental illness, to her mother’s ill health. It seemed as though every episode somehow managed to have Lupe in tears, almost as if to show off how easily Machado can get to that emotional place on a dime, and it never felt forced, or schmaltzy, or out of place.

Lupe is an amazing character, because she captures exactly what it is to be a child of two worlds. Whereas her kids feel more “American,” even though they definitely have Cuban pride, you can feel the influence of Cuban culture on Lupe despite the fact that the U.S. is the only country she’s ever known. There are contradictions in everything she does, from the way she approaches her relationships (she can’t have sex without love….despite only wanting sex from the guy she’s dating at first), to the way she deals with her mental health (being all about therapy and medication…until she thinks she’s “got this,” and stops). Machado weaves the contradictions together seamlessly, creating a beautiful and nuanced character.

And oh my goodness, if she doesn’t get an Emmy nomination for her big monologue in the season finale that made me absolutely weep, there is no justice in the world.

There are so many amazing things about One Day at a Time, but watching these two women work makes the show worth it all on its own. 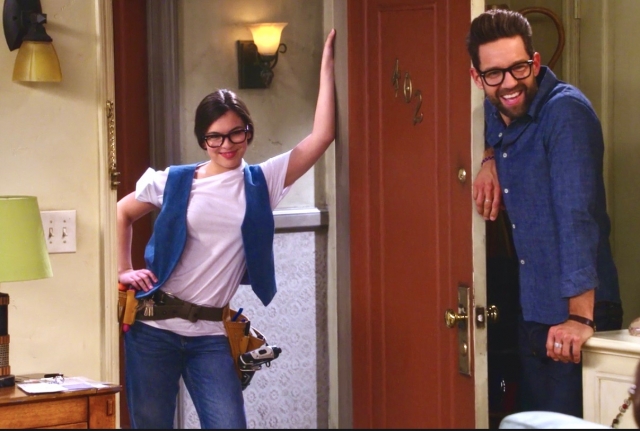 2 – SO MUCH AWESOME QUEERNESS

Elena Alvarez coming out as a lesbian at the end of the first season opened the door to some amazing opportunities for representation. The character was already an activist who cares about everything from feminism, to combating racism, to the environment, add to that the fact that she is a queer Latina, and the character has even more reason to educate everyone in her path (as well as the audience).

However, because the character was designed this way from the beginning, her coming out doesn’t feel like a reason to make every episode she’s in an After-School Special. When she teaches her family about the word Latinx (to which Lydia has the most hilarious response ever), or about gender identity and various pronouns, it all feels really natural.

I also love that the show doesn’t shy away from her flaws. Yes, her activism has often come at the expense of making friends. Yes, she can be hypocritical when her values interfere with something she wants. Yes, she absolutely can be stubborn and self-righteous and overbearing. And that’s all okay. Again, she’s a nuanced female character, and a part of being that is that you get the good and the bad.

And SHE’S DATING SOMEONE AWESOME: the gender non-binary Syd (Sheridan Pierce) who is just the sweetest little nerd you’ll ever see. The characters on the show never slip on calling Syd “they,” and “Sylena” are just unbelievably adorable in their love and their shared geekery. Just look at these two:

But oh my God one of my favorite moments with Elena was an homage to the original One Day at a Time show and a moment of queerness. In one episode, Elena becomes Schneider’s “intern/trainee,” and on her first day as a “handy-ma’am” she dresses up for the occasion…and she comes in in an outfit that recalls the way the original Schneider used to dress back in the 70s. Even better, she totally queers up the proceedings:

Be still, my goddamn heart. I LIVE AND BREATHE FOR BUTCH “SCHNEIDER” ELENA!

3 – POLITICS FROM A LATINX PERSPECTIVE

Season Two manages to say all sorts of things that are anti-our current president, but manage to never say his name. However, it is quite clear from what they do say that the Alvarez family is not about this current administration. Yet, the anti-administration sentiment is only the tip of the political iceberg this season, and One Day at a Time deals with all sorts of social and political issues from a multi-generational, distinctly Latinx, and specifically Cuban perspective.

In the beginning of the season, Alex (Marcel Ruiz) becomes unruly and hostile. Typical tween stuff, right? Well, partly. In an early episode, when his family embarrasses him by being “too Cuban” at one of his baseball games, he reveals that a couple of white boys he goes to school with started calling him Latinx slurs and telling him to “go back where he came from.”

The episode proceeded to examine not only the ways in which white Americans can be bigoted and racist against Latinx, but also (and this was the part I was really glad for) examined colorism within the Latinx community. Alex got picked on because he’s brown and “looks” Latinx, but Elena never does (she even gets mistaken as Schneider’s daughter at one point), because she’s white. This causes a crisis of identity in Elena, who has also lost her Spanish, and drives her to connect more with her Cuban roots. Meanwhile, Alex has to learn the harsh reality of being able to handle racism without resorting to violence.

The other part of this is Lydia’s insistence that Cubans are “mostly white.” Her continued repetition of this “fact” (even though Lupe points out all the black and brown Cubans they know) causes Lupe to comment on the fact that even Latinx can be “a little bit racist sometimes.” HELL YES they can. Though white Americans are too busy lumping us into a faux community held together by the colonial language we all happen to speak to notice that we are made up of different races. But colorism is real, you guys, and I was so happy to see that addressed from a Latinx perspective on this show.

While I kind of chafe at the constant need to frame Latinx stories in terms of “immigration,” I loved how One Day at a Time handled it this season, by comparing Lydia’s citizenship status to Schneider’s citizenship status. They both have green cards, but she is from Cuba and is from Canada, and so the point is constantly (and subtly) made that while both of them are immigrants, it’s Cuban, accented Lydia that will always be suspect and “othered,” not white, Canadian Schneider. 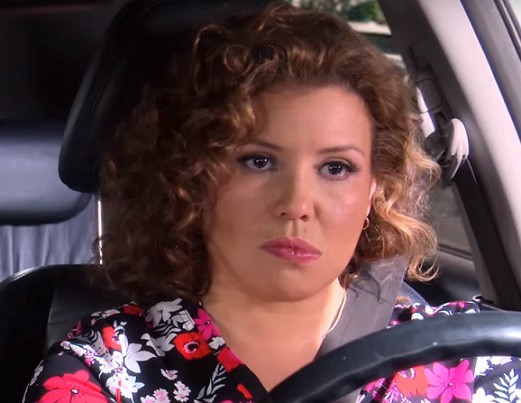 Throughout the season, Penelope is trying to keep it together and is having a hard time, despite the fact that she falls in love and has a wonderful relationship as a stabilizing force in her life. This is because, without a doctor’s advice, she decides that she doesn’t need medication or therapy for her depression and PTSD anymore and goes off both.

Watching Lupe go through this is harrowing, but it’s also done with love and respect, even as the show is honest about how others might react, or alternately how a person in the throes of their disease might negatively impact others, even without intending it. There are several times in which an un-medicated Lupe lashes out in ways that are cruel, and those moments aren’t softened. However, she’s also not vilified.

Meanwhile, her mother and kids do their best to navigate her increasingly unmanageable life, ultimately recognizing that the rock of their family needs a rock of her own, and they vow to do better to be more supportive of her as she supports them.

All of this is particularly important on a show about Latinx as very often, in communities of color, mental illness is seen as “white people problems.” Latinx are often skeptical about the need for therapy or medication. That was portrayed in Season One of this show, actually. Now that Lupe has come around to accepting help in the form of meds and therapy, we get to see a portrayal of a Latina struggling with that in a loving and compassionate way. I think there are so many Latinx dealing with mental health issues that will benefit so much from this kind of representation.

In addition to all of the more serious-minded, representation-related reasons cited above, One Day at a Time is just hilarious. While multi-camera, half-hour, family-friendly sitcoms seem to be going away in favor of single-camera comedies with humor based in a specific kind of mean-spirited snark, One Day at a Time proves that there is plenty of humor to be mined in the multi-camera format.

By making its humor specific, it manages to make the laughs universal, also proving that in comedy, or any other genre, one doesn’t need to worry about being “mainstream” to appeal to the most people. Writing with nuance and specificity lends material a depth that allows for people of all sorts to find a way in.

Whether you are Latinx or not, One Day at a Time is comedy gold, and you should get to watching it immediately! Seasons One and Two are now available on Netflix.