Because you can't stay neutral in the face of racism.

Over the weekend, YouTube megastar Felix Kjellberg, aka PewDiePie, posted a video that shows him using hateful, racist language. Yes, again. In a live stream of the game Battlegrounds, Kjellberg becomes irritated with another player, and casually calls him “a fucking n—.” He follows that up by saying “Sorry, but what the fuck. What a fucking asshole,” as if “asshole” and the n-word are interchangeable insults.

Vanaman and his team at Camp Santo are big supporters of streamers. But there’s a difference between supporting streamers and holding a man with an audience of millions accountable for propagating and normalizing bigoted language. Vanaman laid out his reasoning on Twitter.

There is a bit of leeway you have to have with the internet when u wake up every day and make video games. There’s also a breaking point.

I am sick of this child getting more and more chances to make money off of what we make.

He’s worse than a closeted racist: he’s a propagator of despicable garbage that does real damage to the culture around this industry.

Furthermore, we’re complicit: I’m sure we’ve made money off of the 5.7M views that video has and that’s something for us to think about.

Lastly: I love streamers. I watch them daily and we sent out over 3000 keys to professional and amateur streamers of FW.

There are plenty of people online debating the validity of a copyright claim, especially since Campo Santo gives permission for streaming on their website. As of this morning, the of Kjellberg’s Firewatch stream has been removed. Whether or not it stays down, this is an important message–one that other game developers who don’t want to show tacit approval of racism by lettingKjellberg profit off of their work will hopefully join in sending.

The most disturbing and prevalent response to Vanaman’s tweets and the conversation surrounding Kjellberg’s use of the racist slur is the number of people insisting anyone upset is overreacting. His fans are–as they have in the past when slurs slip out of his mouth and into the ears of his millions of followers–committed to the idea that he’s not really racist, he just uses racist words, like, for fun.

That’s basically the definition of normalization. The argument that Kjellberg’s slur a big deal because he just says these things “to be funny” or that he “doesn’t really mean it” is itself pure racism. Every time language like this is used, it causes pain for some viewers, and instills a normalized sense of supremacy in others–telling them that their desire to use racist language is more important than acknowledging the actual realities of racism.

The only excuse Kjellberg could think to give was “sometimes I forget I’m live streaming.” (As if that makes it better?) He said in the same video, “I know that no one watching gives a shit.” While a good number of his fans are eager to dismiss his racist language as unimportant, there are plenty of fans who do give a shit, and not just out of anger. A lot of people do care, and do notice when he says racist things. 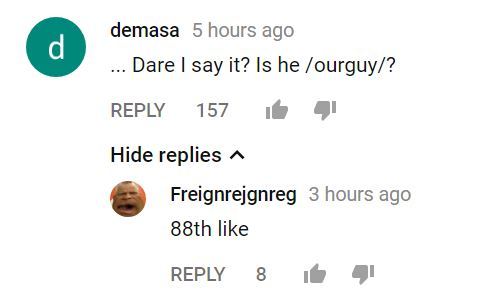 If you’re not familiar, “/our guy/” and “88” are both coded references to white supremacy and antisemitism. Kjellberg may think his “true” fans don’t care if he casually throws around bigoted language, but many do. A lot of people care that he’s using hate speech because they disapprove, and a lot care because they support it. Those who dismiss the anger as frivolous, as well as those who stay silent (and silently profit) aren’t neutral. There’s no such thing as “neutral” when it comes to racism. They’re bolstering those who depend on fear and indifference to remain unchecked in their hate.

Both viewers of PewDiePie’s work and the creators of the games he streams have the ability to send a message by refusing to participate in his work. Some, of course, are crying “freedom of speech” violations, because there will always be people who don’t understand what that means. Sure, he and others like him, with millions of dollars and millions of followers, are free to say whatever they want in their work. And the rest of us are free to not to support it.

Freedom of speech is freedom of prosecution
His stream is not commentary, it is ad growth for his brand
Our game on his channel =endorsement