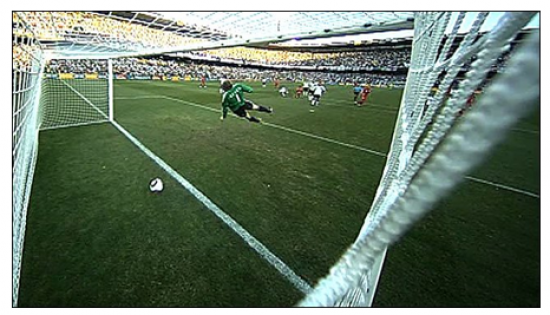 Contested ref calls are a part of the game, but this past Sunday, soccer fans watching the World Cup were treated to two major displays of referees’ incompetence: First, when England played Germany, England was down 2-1 when they got the ball into the goal, as seen in the above picture — but because the ball bounced out before the referee ‘saw’ it, they didn’t get the goal. Arguably, had they finished the first half tied 2-2, they might have played the second half differently and not lost 1-4. That afternoon, when Argentina played Mexico, Carlos Tevez scored Argentina’s first goal when he was wildly offsides (see below), but the ref didn’t overturn it. Argentina went on to win 3-1.

Now, FIFA president and arch-traditionalist Sepp Blatter has announced his plans to reconsider the tech solution that had long been out of the question for him: Video replays. 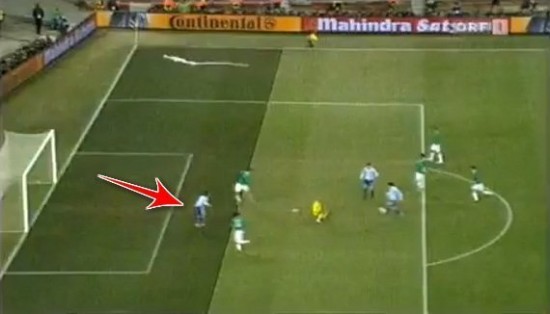 Generally, Sepp Blatter and the soccer traditionalists will argue against video replay on two grounds: First, soccer is played worldwide, and since many of the developing nations in which the sport is popular can’t afford video tech, it would be unfair to create a bifurcated structure of play where the richer nations were able to play ‘better’ or more rigorous soccer. Second, and far more shakily, that mistakes are simply a part of the game.

But these arguments ring hollow for many fans — I daresay the vast majority of fans in the US and UK. For one thing, allegations of corruption swirl around FIFA and even Mr. Blatter personally, and many fans skeptical about the outcomes of matches like those in the World Cup in South Korea in 2002 allege, fairly or not, that corrupt refs are to blame, and that many of their bad calls would be demolished by rigorous replay tech. Less controversially, the problem with disputed calls is that they play such a pivotal role in the game: In a game where 1-0 is a common outcome for a match, it seems unfair that the happenstance of one ref call should be the difference between a 0-0 game and a 1-0 game, or a 1-0 victory and a 1-1 draw. These disputes suck the oxygen out of what should be the game’s main focus: The skill of the players themselves.

According to the Wall Street Journal, FIFA has ‘reopened the file’ on replay tech following this past weekend’s disputed calls, and that Blatter personally apologized to both the British and Mexican teams after play.

Mr. Blatter said it would be “a nonsense” for FIFA not to look again at goal-line technology with its rule-making panel. “After having witnessed such a situation,” Mr. Blatter said, referring to England’s non-goal against Germany, “|we have to open again this file, definitely.”

He said the International Football Association Board would consider changes at a July meeting in Cardiff, Wales. “Naturally we will take on board again the discussion about technology. Something has to be changed,” Mr. Blatter said, while adding that the system couldn’t be changed midway through the World Cup.

FIFA also will update its referee training program. Mr. Blatter said FIFA has set a deadline of October or November to create a new concept for improving match control at top tournaments. He said the dossier is “on the presidential table.” FIFA spent $40 million on a program to prepare match officials world-wide before selecting 30 referees and 60 assistants to work in South Africa, Mr. Blatter said. “They have their eyes, their perception of the game. So let’s make that better and hope we are going forward,” Mr. Blatter said.

Even if the traditionalists win and FIFA decides not to allow video replay, there’s no excuse not to enforce better reffing. At the very least, adding refs who stand behind the goals whose sole job is to determine whether goals are valid would do a lot to neutralize some of the worst calls. Better yet, FIFA should just come up with a fair system for video replays that isn’t open to abuse as a stalling tactic but sweeps away bad calls, and bring the sport into the 21st century, where it belongs.

(via WSJ. second image via HuffPo.)