Bank Behind That “Fearless Girl” Statue Systemically Discriminated Against Hundreds of Female Employees. I Wish I Were Even a Little Surprised 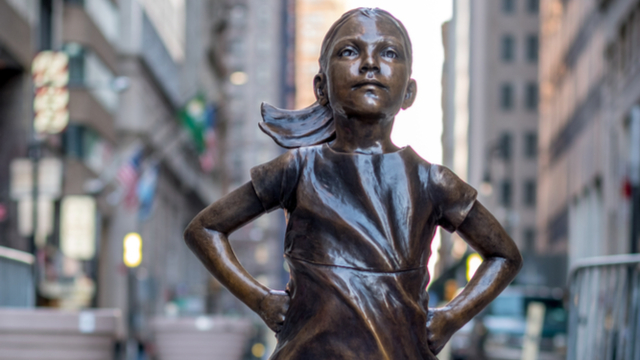 We’re not new to the idea that some people use feminism and other forms of perceived wokeness as a sort of commodified deflection shield, attempting to buy themselves goodwill they can then exploit by trampling those they claim to support. This is not something we haven’t seen before. But this story of the Wall Street bank that commisioned the “Fearless Girl” statue discriminating against hundreds of women is so over the top it feels like it needs to be from The Onion. But of course it’s not. It’s from life.

Yes, apparently while they were putting up the Fearless Girl–you know, that adorably precocious child staring down the iconic Wall Street bull as a tourist-friendly symbol of feminist power–they were simultaneously upholding their own systemically sexist structures, paying women and black employees in leadership positions “statistically significantly” less than their male colleagues, as well as voting against gender pay shareholder proposals.

According to their settlement agreement, State Street Corp. has been accused of discriminating against at least 300 women since 2010, and it’s costing them $5 million. A symbolic statue is nice, but it’s not going to balance out years of systemic discrimination, guys.

There was already plenty of debate over the Fearless Girl statue when it was erected. There were questions of whether corporate-commissioned art was a good idea, especially when using feminism as a marketing tool for a potential publicity stunt. The guy who created the bull statue wasn’t too happy either. And there was the question of why a child was chosen to symbolize female power, in a statue that was designed to encourage women (grown women) to participate in the corporate world.

I guess we can add “overwhelming sexist hypocrisy” to the list.