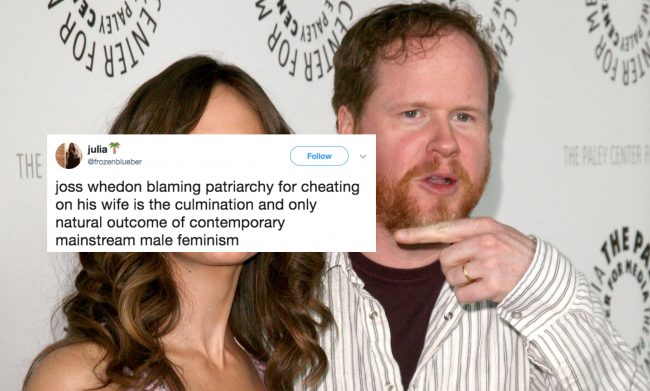 Following the bombshell essay from Kai Cole, Joss Whedon’s ex-wife, that laid bare Whedon’s affairs and the hypocrisy of his hyped-up feminism, Twitter is having a field day.

For many fans of Whedon—and people who are not-fans of Whedon—one of the worst parts of Cole’s essay is the allegation that Whedon stayed married to her despite numerous affairs because he wanted to maintain his image as Hollywood’s premiere Woke Male Feminist. So he built up a fanbase around projects that featured strong female characters while at the same time his mentality was more in line with: “When I was running Buffy, I was surrounded by beautiful, needy, aggressive young women. It felt like I had a disease, like something from a Greek myth. Suddenly I am a powerful producer and the world is laid out at my feet and I can’t touch it.” To quote our Marykate Jasper, “Ew.”

And then, apparently, touch it Whedon did—sleeping with actresses under his employ for more than a decade. Infidelity is difficult enough, but it’s the abuse of the power dynamic that upsets me more than anything in this scenario. So I’m finding Twitter’s Whedon roast cathartic.

Why does this feel so sad and true?

Somewhere there is an academic for whom this is probably the case.

My heart goes out to Kai Cole for having to endure the one-two punch of infidelity and Joss Whedon mansplaining things to her.

This is Not Breaking News.

Oh Joss Whedon is outed as being garbage again? How often do I resurrect this thread https://t.co/GoQ0sE8vKC

Me: “I don’t wanna hear about Joss Whedon at all anymore”
“Joss Whedon Is a ‘Hypocrite Preaching Feminist Ideals,’ Ex-Wife Says”
Me: pic.twitter.com/Q3wvjF2UQa

Excuse me, I need to take a shower.

Joss Whedon blaming his infidelity on the patriarchy is the most bro-feminist thing ever. pic.twitter.com/9mXskF0An8

Oscar the Grouch would never do this, though.

joss whedon cheated on his wife for 15 years and kept her around so his perfect geek-feminist reputation wouldn’t be ruined. he’s garbage

We zoom in on JOSS WHEDON, sitting alone, murmuring sarcastic comebacks to no one.

Laugh now but Joss Whedon’s dude-feminist credentials will be fine. He’ll make up for it all when he casts Lena Dunham as Batgirl.

Also she is is acid-tongued AND impossibly beautiful.

Hey does anyone want to go in with me on We Told You So: A Joss Whedon Zine?

This is exactly the wrong take, friend. “Hungry and aspiring young actresses” shouldn’t have to sleep with their producer to get ahead. That it “isn’t exactly surprising” is patriarchy in action.

Did you know that you can be a fan of works that Joss Whedon has created AND criticize Whedon’s hypocrisy? This person gets it. Walking and chewing gum at the same time is fun!

Hearing a lot of people start sentences with “I don’t AGREE with Joss Whedon, BUT…” today.
Buffy Summers would uppercut ALL of you slimes