In Pointless Fight Over “Fearless Girl” Statue, Everybody Loses

Galatea is so over this. Me too. 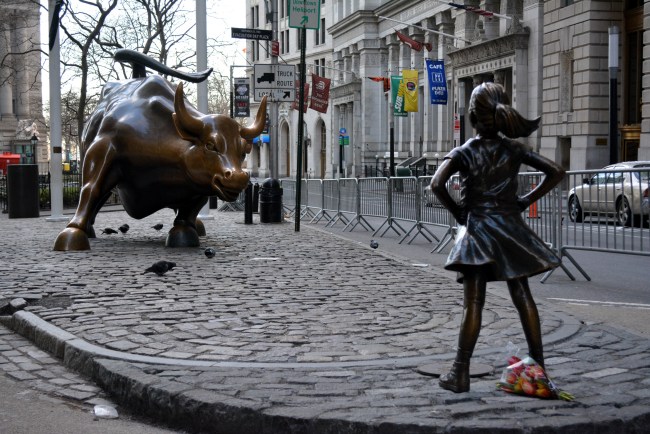 We touched on this in Things We Saw Today, but to reiterate: there’s now an art fight—that has the potential to become a legal battle—over the placement of the Fearless Girl statue vs. the creator of the Charging Bull of Wall Street.

People, please. We have space enough for all of the bronze metaphorical shapes in Lower Manhattan. Personally, I’m waiting for a giant copper self-satisfied cat licking an enormous bowl of cream that signifies the corporate greed that runs America.

As reported by Jezebel and NPR, Charging Bull sculptor Arturo Di Modica is apparently looking for some time in the sun and newfound relevancy by holding a news conference, wherein he aired grievances that his enormous bovine is being overshadowed by a li’l lady.

“The girl is standing there like this in front the bull, saying, ‘Now, what are you going to do?’ ” NPR informs us Di Modica told a bunch of cameras and reporters with nothing better to do at his “news conference.” (Talk about fake news.) Although he hasn’t brought the matter to the law yet, Di Modica’s lawyer has ominous words (though he totally supports women in the Wall Street workplace! Totes). So, now, what are you going to do?

“There are issues of copyright and trademark that needed to be — and still need to be — addressed,” Di Modica’s attorney, Norman Siegel, said at the news conference. Siegel, a longtime civil liberties lawyer, carefully emphasized that they, too, support the fight for gender equality and that they do not want the Fearless Girl banned entirely.

Talk about bending over backward in an attempt to gain money and fame through scurrilous threats. If I were made of metal my arm would need to be melted down and reshaped in order to reach that far.

It’s clear to anyone with half a cow brain that Fearless Girl doesn’t infringe on Charging Bull‘s trademarks and copyrights through sheer proximity, even if Di Modica asserts that his statue’s meaning has been shifted to scum and villainy by the placement of a small assertive female before it. NPR:

He maintains that Fearless Girl — sculpted by Kristen Visbal and commissioned by the firm State Street Global Advisors, which intends to call attention to a lack of women leaders on Wall Street — at once distorts the intent of his statue from “a symbol of prosperity and for strength” into a villain, and does so for the firm’s own commercial gain.

This is a close reading even my former literature professors might call bullshit—sorry—upon. While it’s certainly possible that people read the Girl as challenging the Bull, it’s not like fewer folks are visiting, viewing, and photographing Di Modica’s statue. In fact, it’s probably had more visitors since her addition to the street on International Women’s Day than ever.

It wasn’t like tourists have been flocking there to hug that grown up golden calf and be like “Yay, Wall Street!!” in the post-recession years anyway.

What strikes me as Di Modica’s one semi-valid point is that the Fearless Girl is not a pure artistic production but a commissioned strategy by the firm State Street Global Advisors.

While it would’ve been extra-cool if Fearless Girl arrived guerilla-art-style plunked down by unknown creators without a corporate agenda, fact is she’s made her mark and makes a point about the lack of women on Wall Street, no matter why she was made. She’s staying at least until 2018 because people have found resonance with her, and given his own statue’s origin, Di Modica should suck it up. The Mayor thinks so, anyway.

Men who don’t like women taking up space are exactly why we need the Fearless Girl. https://t.co/D2OZl4ituJ

This is all particularly ironic because Di Modica’s now-famous Charging Bull arrived without permission: “Di Modica himself plopped his 3 1/2-ton bovine beneath a Christmas tree in front of the New York Stock Exchange in December 1989 without a permit.”

The Bull—now practically synonymous with Wall Street—was originally carted off before getting relocated and at last allowed to stay. Di Modica should be grateful his own statue remained, and sympathetic to newcomers, not litigious.

Basically, no one gains from this artistic spat of the statues. The Girl shouldn’t be forcibly removed or made to pay damages, because how does that look in this godforsaken world—a fearless girl-child sacrificed to raging capitalism. The Bull should stay right where it is, daunted by petite feminity.

Can’t these statues all get along? And who is going to make my copper cat?