Batman Wears Thongs, Pass It On: The Mary Sue’s Favorite Comments Of The Week

Doesn't have the same ring as "Jingle Bells, Batman Smells," though. 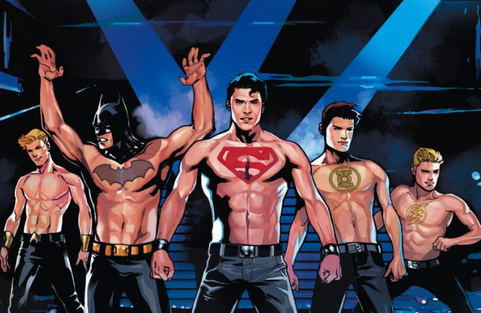 Did we have a pretty great week for comments from our delightful readers? Yes, yes we did. Did we deliberately pick the one about DC’s recent Magic Mike/Justice League crossover to lead with just so we’d have an excuse to use that image again? I don’t know. Maybe. We’re not telling. You can’t prove anything, see!?

Here’s the comment in question, from Miss Cephalopod: “Why does no one in that picture have nipples? This is the question we should be asking! Also, that one shadow on Batman’s hip looks like a thong strap. Headcanon accepted.”

This week Jamie Dornan dismissively told the media about the time he visited a sex dungeon to prepare for his role in 50 Shades. We told him not to bite the hand that feeds him, and Will Spreadbury added this useful advice: “Unless the hand that feeds you is into that sort of thing.” See, he gets it.

“[W]hat do you do with your old newspapers? Do the pictures scream when they’re recycled?” —No Brainmist do not make us have Harry Potter worldbuilding nightmares please nooo

What did we just say, Brainmist.

“We can rebuild him. We can make him stronger, faster, better…‘CAUSE WE’RE ****ING AWESOME.” —Kris Smith, on watching a disabled dog run around on his newly 3d printed legs. I’M NOT PUMPING MY FIST IN THE AIR WITH TEARS IN MY EYES, YOU ARE.

The script for Batman v Superman might not have any Wondy/Lois/Superman love triangle, thankfully, “But we haven’t ruled out the Super/Bats/Aquaman love triangle yet, so there’s still hope,” says Eric Weins. Aaaaaaand I ship it.

We were happy to see the rest of you shared our opinions on this uncomfortable-looking Cinderella marketing, but this thread punctuated by Jen Roberts really took the cake (and then did nothing with it so we’d be able to fit into our impossible dresses): 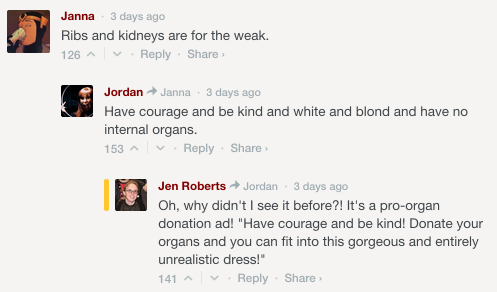 “Clearly this is a sneaky way for techs to get their SGA cards.” —Lady Commentariat, on a recent Buffy the Vampire Slayer crew member’s sudden appearance in the “remastered” HD version.

On the same Buffy post, Mark made our pun receptors swell with… whatever it is puns make you feel. Joy? Revulsion? Both?

Are you happy now, Mark? Are you.