J.K. Rowling Regrets Killing at Least One of Her Harry Potter Characters. No, Not That One.

Not that one either. 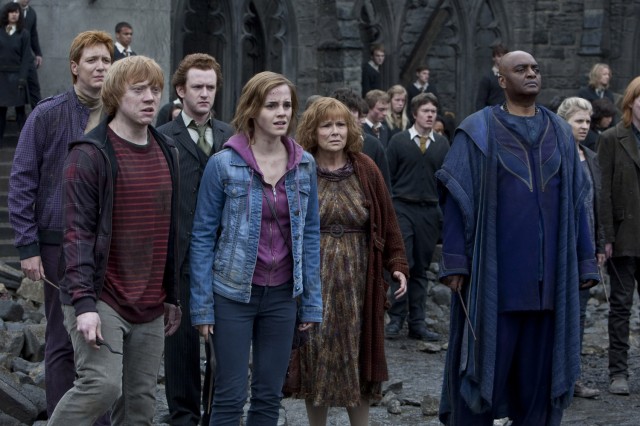 Spoilers for the entire Harry Potter series, of course.

If you were one of those Harry Potter fans who spent most of Harry Potter and the Deathly Hallows sobbing into its pages, I’m sorry, but J.K. Rowling still felt she had to kill all those characters. In a new posting today on Pottermore, the author described one character she regrets giving the axe to – Florean Fortescue:

Florean is a descendant of Dexter [Hogwarts Headmaster Dexter Fortescue], and I originally planned Florean to be the conduit for clues that I needed to give Harry during his quest for the Hallows, which is why I established an acquaintance fairly early on. At this stage, I imagined the historically-minded Florean might have a smattering of information on matters as diverse as the Elder Wand and the diadem of Ravenclaw, the information having been passed down in the Fortescu from their august ancestor. As I worked my way nearer to the point where such information would become necessary, I caused Florean to be kidnapped, intending him to be found or rescued by Harry and his friends.

The problem was that when I came to write the key parts of Deathly Hallows I decided that Phineas Nigellus Black was a much more satisfactory means of conveying clues. Florean’s information on the diadem also felt redundant, as I could give the reader everything he or she needed by interviewing the Grey Lady. All in all, I seemed to have had him kidnapped and killed for no reason. He is not the first wizard whom Voldemort murdered because he knew too much (or too little), but he is the only one I feel guilty about, because it was all my fault.

You heard her. Not Fred, not Lupin, not Tonks, not Dobby, not even poor, soft, innocent Hedwig. The guy who gave Harry free ice cream that time.

Aside from this revelation, the recent postings on Pottermore have actually been pretty cool. We’re getting more info on Malfoy soon and we got some pretty cool stuff on Umbridge too. Keep an eye on Rowling’s twitter, the Pottermore twitter, and the website itself for more!