It's all falling into place. Of course, that place is nowhere near this place. 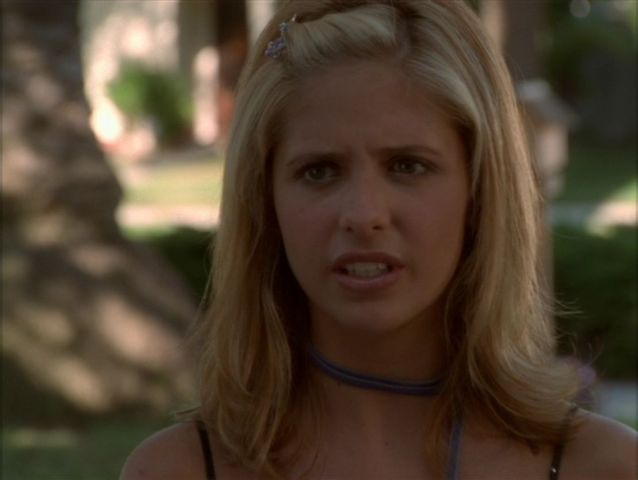 When Buffy first hit the airwaves in 1997, it was filmed in standard definition with a 4:3 aspect ratio. Nowadays many TV owners have 16:9 widescreen sets capable of much higher definition. So what do you do when you want to go back and rewatch those old shows—leave them in the correct aspect ratio and do what you can to improve the quality of the original film? No, in the case of 20th century Fox’s remastered version of Buffy the Vampire Slayer, you totally ruin them and make whatever the heck changes you want regardless of creator intent. Whee!

These new remastered episodes have been airing on the cable channel Pivot over the last few months, possibly to anticipate a Blu-Ray release of the first two seasons. But as fans of the show have noted, they’re really not done with any mindfulness—in fact, some of the new framing is straight-up terrible. Some scenes are cropped to fit the widescreen, compromising the composition of the visual shot:

Doesn’t have quite the visual impact, huh.

Others scenes have had visual information from the original film added to them, which has the unfortunate side effect of revealing the once off-frame camera operators and crew members:

“Don’t mind me, just a cameraman at the library!”

Even characters who are supposed to have mysteriously disappeared off frame are revealed, a la the Master:

In this scene, Buffy is wildly trying to follow the voice of a character who’s still clearly visible in widescreen.

Oh, of course, and let’s not forget the shots that feature Buffy’s newfound collection of lighting equipment!

And there are also the brightness issues, which in a show about creatures that can’t go out into sunlight can have extra unfortunate connotations. Scenes that were shot during the day but were supposed to have taken place during the night have had the dark filter removed from then, which will probably confuse a lot of new viewers every time Angel doesn’t burst into flames.

This isn’t the first time a media company has tried to pull a standard definition television show into the modern age —HBO is currently planning a similar project with its hit show The Wire, which was also filmed in 4:3 standard definition. Of course, HBO actually hired series creator David Simon as a consultant. No such attempt to contact Buffy‘s Joss Whedon has been made, and he is not happy about it:

Of course, Whedon’s never much been a fan of changing the aspect ratio of a work to suit the consumer’s desires, anyway. After the UK DVD release of Buffy season 4 was formatted in letterboxed widescreen, he wrote this personal message to be included with the US release, which was formatted in the original aspect ratio intended for the show:

The BUFFY’s I (and others) shot were framed for traditional TVs. Adding space to the sides simply for the sake of trying to look more cinematic would betray the very exact mise-en-scene I was trying to create. I am a purist, and this is the purest way to watch BUFFY. I have resisted the effort to letterbox BUFFY from the start and always will, because that is not the show we shot. This is. So enjoy! Stop breaking things.