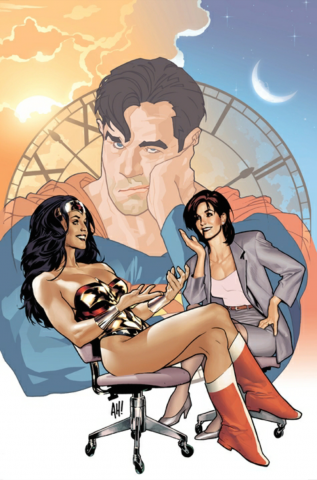 It’s a rough life, hoping for a greater presence for female characters in superhero movies. So it’s not particularly surprising that folks can find potential sooty interiors to any silver lining, namely, that now that Superman and Wonder Woman are an item in comics, it might mean that Batman v Superman: Dawn of Justice will release with a healthy helping of that tired trope of female competition over a man.

But, as per usual, Amy Adams has arrived for the rescue. During a press event for Tim Burton’s Big Eyes, she reassured Coming Soon.net that that was not a subplot that BvS:DoJ would be interested in.

They always think that if you put in another woman and automatically… ‘Catfight!’ No, I think that’s a male fantasy thing. I don’t think that’s reality… I don’t know how it will turn out, if we’re going to be competition, but we are not in this, I can safely say, and we’re not in real life. She’s just the coolest girl ever.

Adams added that she was also just happy to have Gal Gadot involved because it meant there was another woman regularly on set “even if we don’t work together a lot.” Man of Steel‘s Faora is, understandably, elsewhere. And though that’s a tantalizing little hint, there’s not a lot we can draw from the implication that Lois Lane and Wonder Woman don’t share a lot of screen time in BvS:DoJ. It could mean that Lois doesn’t appear much, or that Wonder Woman doesn’t appear much, or both! The movie’s got a lot of characters to juggle, after all.

And, if Badass Digest’s look at early scripts pans out, the movie’s also juggling some references to one of the more controversial aspects of Man of Steel: Superman’s use of deadly force, and the movie’s astronomically high implied death count. If their info is good, and the nods survive the script revision process, we could see a movie that explicitly establishes a Superman who is now firmly against killing, and has the presence of mind to take big ol’ superpower battles the heck out of major population areas. Good news all around!

(via Coming Soon.net and Badass Digest)