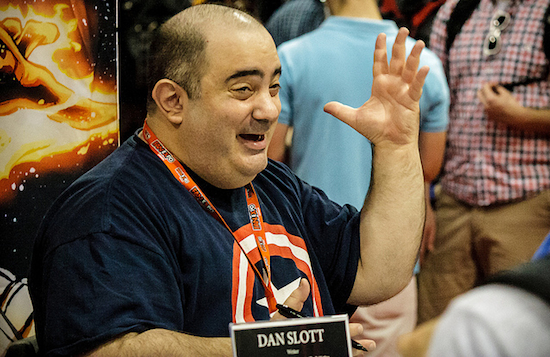 We’ve all had that feeling of nerd rage at some point in our lives, though the exact extent of this ire varies from person to person. The common denominator among these moments of displeasure is that they’ve always been triggered by things such as changes to a particular continuity’s status quo or a company’s mishandling of a beloved intellectual property. While we’re entitled to our opinions, there is such a thing as going too far in expressing them. Such was the case when irate fans took to Twitter and began threatening Amazing Spider-Man writer Dan Slott over the series’ final storyline in issue #700. At this point, however, calling this nerd rage is a large understatement.

After Slott was assaulted with these threats, the writer pulled down his profile photo and changed it and the entirety of his Twitter page’s background to solid black. Additionally, his bio now reads:

Death threats and threats of violence are being reported. Insults and vulgarity are being blocked. Not criticism. Please be civil. Thank you.

Scrolling through Slott’s tweets also reveals that he is planning to take legal action against one persistent Twitter follower involved in these threats on his life. It reads:

Thanks. I know who you are. I have a screen cap. You live in the US. That’s illegal and NOT covered under free speech. Expect legal action.

In spite of this extreme and grossly unwarranted vitriol, Slott assured his legions of supportive and concerned fans that he is doing fine, but is still strongly considering ligation. He tweeted:

Slott will continue to pen the adventures of ol’ webhead in the soft reboot of the series entitled The Superior Spider-Man under the comic book publisher’s Marvel NOW! initiative this January.

(via Digital Spy, image via The CJM)