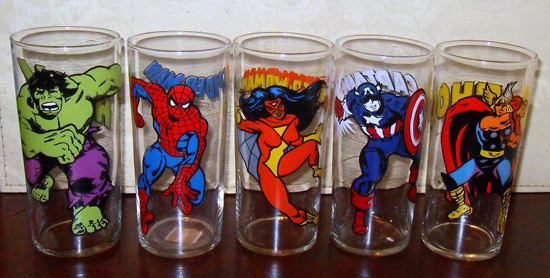 As it happens, collectors take whatever doodads they’ve decided to squirrel away rather seriously. These habits range in description from idle passion to dangerous obsession. Granted, Beanie Babies don’t often cause fistfights these days, but that doesn’t mean they couldn’t. Things get even more serious if these collectibles happen to be fragile. A fight this past Wednesday took a dark turn when a man allegedly stabbed his cousin to death with scissors following the destruction of one of his Marvel Comics glasses. The two were, of course, drinking at the time.

Erik Jensen was charged with first-degree murder in the slaying of his cousin, Raymond Ogara, and had his bail set at $800,000 yesterday. According to Jensen, the two were drinking from the glasses — a rookie mistake — when Ogara dropped his and it shattered. We hope it wasn’t the sweet Spider-Man one pictured above. The pair then argued, which escalated to a physical confrontation, and then suddenly Ogara had multiple stab wounds from a pair of scissors. When police arrived, they found Ogara dead in a pool of blood with the scissors next to him.

Jensen previously told police that the two were “play wrestling,” with Jensen winning, and then suddenly Ogara was on the floor bleeding. Depending on the amount of alcohol imbibed, it’s not impossible to imagine that Jensen legitimately doesn’t recall what happened, but it’s also possible that he just stabbed his cousin in a fit of drunken rage.