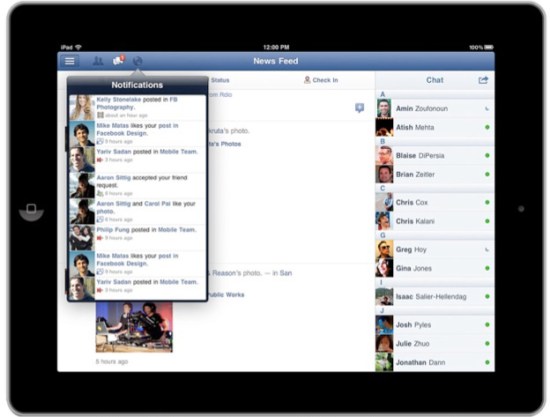 For Facebook, the service has just found another way to keep more users looking at and using Facebook. Though a perfectly serviceable web app has been available in the interim, this new version has integrated gesture controls, and can take advantage of the iPad’s front and rear cameras. Though some of these features will make their way into the iPod version, the iPad app has apparently been designed to take advantage of the extra screen real estate with an emphasis on fullscreen photos and videos.

For Apple, the release of the app could signal the start of better relations between the two companies. According to the NYTimes report, the app was held up for an extended period of time while Apple and Facebook tried to hash out agreements for other cooperative efforts, such as integrating Ping with Facebook. If this is true, it might explain why iOS 5 has so much Twitter integration and no sign of Facebook anywhere.

Regardless of the backstage machinations between titans, it’s good to see this app released. Even someone like  me, who doesn’t own an iPad and apparently spends far, far below the national average of 8 hours on Facebook a month, can appreciate the new app. It’s big, clean, and has that irresistible touchability that is the hallmark of a good iPad app. Hopefully this burying of the hatchet will mean more and better apps for consumers, and less in-fighting between companies. I’m looking at you, Google Voice app.