Contrary to Popular Belief, Lake Natron Does Not Instantly Turn Birds To Stone 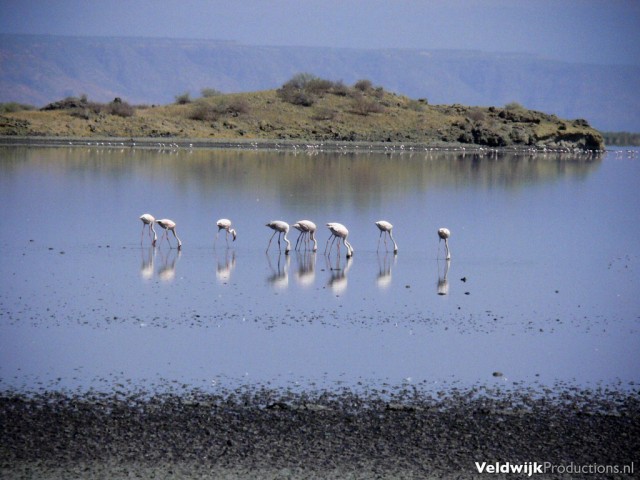 Sometimes the media does this thing where it takes something incredibly fascinating and turns into a crappy game of telephone, and at the end everybody believes something completely fake. Case in point: after those gorgeous pictures of mummified Lake Natron birds made the rounds, now everybody thinks that the lake has supernatural gorgon-like powers.

No one is disputing that Natron is a dangerous place for most species, of course. As the New Scientist says, the lake can reach temperatures up to 60 °C and has an alkalinity between pH 9 and pH 10.5, making it pretty dang gross on the best of days — it can even burn the skin and eyes of animals who aren’t adapted to it. It also does preserve many of these animals’ bodies, specifically due to the combination of chemicals that are deposited into the water via runoff from a nearby Great Rift Valley volcano, Ol Doinyo Lengai.

Unfortunately, the nuances of this lake’s ecosystem seem to escape many a casual observer, and what people appear to be taking away from most coverage is this: that there’s a lake in Africa that kills literally every creature that comes near it (which is false), and that it’s capable of killing those creatures instantly by turning them to actual stone (which is also false).

First of all, the preservation process is not something that happens instantaneously — it happens over a much longer period of time. Though the photos taken by Nick Brandt depict the petrified birds on perches and in naturalistic poses as if they were just petrified, they are all entirely staged. Brandt said as much in an e-mail to NBC news: “I unexpectedly found the creatures — all manner of birds and bats — washed up along the shoreline of Lake Natron in Northern Tanzania[…] I took these creatures as I found them on the shoreline, and then placed them in ‘living’ positions, bringing them back to ‘life.'”

Secondly, the birds are not “stone,” per se. The chemical process to which they were subjected is much closer to Egyptian mummifcation than anything else, and although the bodies appear chalky and stone-like in appearance, but they are not completely immovable. After all, if that were the case then Brandt would not have been able to reposition his birds into such surreal and breathtaking poses.

Furthermore, there are species that are perfectly capable of living near lake Natron without facing inevitable doom — specifically, there are extremophile fish, bacterium, and a specific type of algae that thrives in the alkaline-rich waters. The lake is also one of the largest breeding ground for North Africa’s lesser flamingos (not to be confused with the greater flamingo, which has a different bill and is just a bit larger– you know, “greater”), who come to the lake to feed on the aforementioned algae. Yes, the occasional flamingo dies and is preserved, but as you can see from the featured image above, there are plenty more that come out just fine.

But of course you wouldn’t know that by looking at, oh say, People Magazine, which calls Natron “a lake in Africa that turns all animals who come in contact with it to stone.” No, People! That’s not what’s happening! It’s so much more complicated than that!