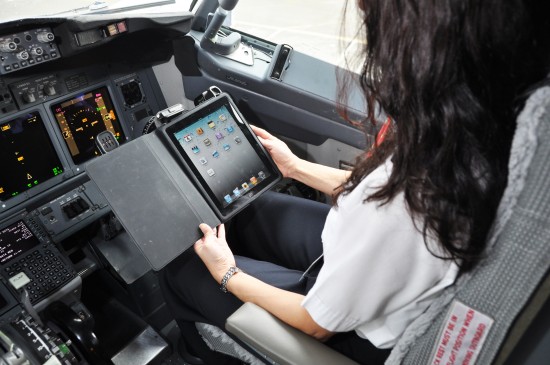 If you’ve ridden on an airplane some time in the last 15 odd years, you’ve probably noticed that the list of approved electronic devices is a bit limited. Most items need to be completely powered down and stowed during taxiing, take off, and landing. The reasons for this vary, but it can be pretty annoying for travelers whose personal electronics represent their only comfort in the nightmare that is coach-class travel. Now, it seems that the Federal Aviation Administration might be warming up to the idea of relaxing their rules about electronic devices.

“With the advent of new and evolving electronic technology, and because the airlines have not conducted the testing necessary to approve the use of new devices, the FAA is taking a fresh look at the use of personal electronic devices, other than cellphones, on aircraft.”

It’s important to note that cellphones, despite their ubiquity, are still off the table. Other devices, like eReaders and possibly tablets, seem to be under consideration.

The fact that individual airlines haven’t been interested in testing new devices probably has something to do with the cost and effort required to perform such tests. The rules apparently require that every version of the device be tested in an empty flight on every plane in the airline’s fleet. So, every possibly iPod would need to fly alone on every possible airplane just to see if iPods could be allowed. For airlines, who are strangers to customer comfort, such efforts are just not worthwhile.

What will happen next is anyone’s guess. To me, it seems likely that the rules will remain largely unchanged. While interference with airplane avionics is a concern, music players and reading devices without transmission capabilities are no doubt banned for use during takeoff and landing so as to prevent distraction and limit the number of items that might be flying around the cabin in the event of an accident.

However, it’s possible — oh so tantalizingly possible — that this could soon lead to a complete re-thinking of electronics on planes. After all, as distracting as electronic devices are, fighting with passengers about turning them off, or how “airplane mode” is not sufficient, is probably even more distracting. Also, the addition of WiFi to most flights is a tacit admission that wireless transmissions really aren’t screwing planes up.

So here’s hoping for a bright future where I can read my Kindle while the cabin crew explains which parts of the aircraft will serve as a floatation device.

(NY Times via Techmeme, image is of an Alaska Airlines pilot using an iPad)