Marines Trying Out iPads Instead of Pounds Upon Pounds of Maps 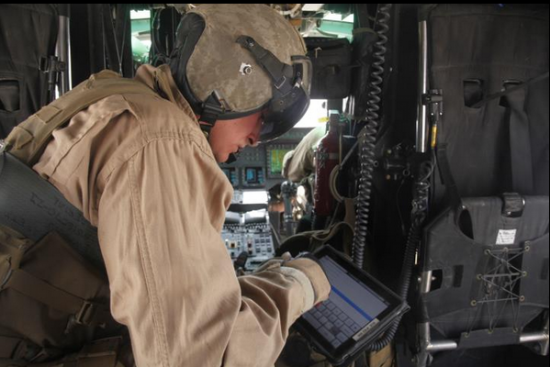 Not too long ago, United Airlines decided it would be prudent to equip its pilots with iPads. Now it seems that the Marines are following their lead. Currently, when marines call in for air-strikes, they radio coordinates to pilots who look them up. Sounds simple enough, but at the moment, these pilots usually have somewhere between 60 to 80 pounds of maps they have to go through. With the use of iPads in the field however, pilots can have less map-mass to deal with and troops on the ground can have much more map-data.

The idea has been in the works for a while now. Initially pilot, Capt. Jim Carlson, unhappy with the state of map-affairs, started messing with his personal iPad and found out that connecting pilots with ground troops was exceedingly easy. At first, higher-ups were not entirely ready to trust intel to commercial devices — despite the fact that the maps were not classified — but considering the recent purchase of $20,000 of tablets and tablet accessories, they seemed to have come around.

While iPads, especially $20,000 of them, may seem expensive to the rest of us, the United States military budget has probably suffered from typos that cost more and if this pilot-program sees big results, there could be wider adoption on the horizon. The iPads have had a great effect on efficiency already. According to Wired, their use has shaved 15 precious minutes off most close-air missions.

This isn’t the first time the military has tried to adopt the use of tablets; air traffic controllers have been using them for a while. If you have any experience with tablets before the iPad though, you probably have an idea of how outdated they must be. Due to this adoption, software developers have already started work on apps tailored to military needs and DARPA is working on charging and battery power innovations that could benefit us all in the long run.

All in all it seems that this could be a huge step forward in military communication and could potentially solve and streamline all sorts of problems and processes we don’t have the clearance to know about. Not to mention, who wouldn’t love to see a combat iPad, even if there wasn’t a consumer model.