The Arrowverse isn’t even technically back from summer hiatus yet, but we’ve already got our eyes set on the midseason for what looks to be the most epic crossover event in television history: Crisis on Infinite Earths. It’s an event that’s been teased for years, and it’s finally happening on screen. After a comparatively modest three–show crossover with last year’s Elseworlds event, masterminds of the multiverse Greg Berlanti and Marc Guggenheim are going as big as possible, integrating every CW DC show, including Black Lightning in to the event.

Crisis on Infinite Earths is legend in the DC Comics cannon. The run of comics, written by George Perez and Marv Wolfman consolidated all the various DC worlds into one, and killed off some major characters doing it. Wolfman is a co-writer on Arrow‘s crisis episode, maintaining that epic legacy. It’s going to be awesome and it’s going to be a lot, so, here’s everything we know about the five-show extravaganza.

Which Shows and When:

After sitting out last year’s big event the Legends of Tomorrow will be back in the mix, along with Batwoman, whose character was introduced in the Elseworlds crossover. The event will air on The CW over five nights and two years, technically, as they take a month break in the middle. Here’s the schedule.

This means a few things. One: we’re probably going to end on a huge cliffhanger torture us through the holiday hiatus. Two: The final appearances of some beloved characters might not come on their own shows. The structure of the Arrowverse crossovers melds all the shows into something more like a movie, and means significant events for characters from one show technically happen on another. 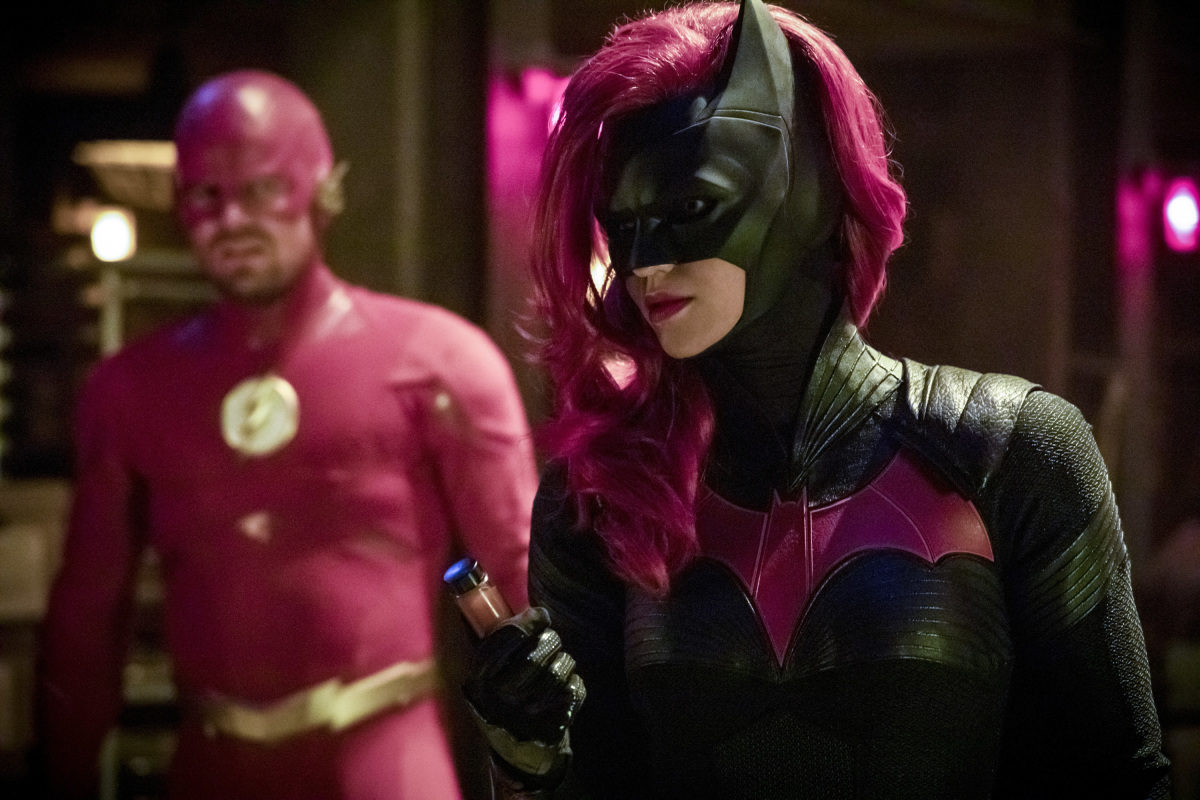 For example, Barry and Iris (and Oliver and Felicity, who crashed) got married on Legends of Tomorrow. The reason this might matter more is that the Arrow episode of Crisis could very well be the series finale of that show, leaving our final looks at the Arrow characters on another show. We don’t know this for sure, but it is an interesting possibility.

The whole point of the Crisis story line (we’ll get there) is that the bad guy wants to destroy all of existence, which means the entire multiverse is under threat…and fair game for guest star and story fodder. Most of the Arrowverse crossovers have involved the multiverse, because Supergirl and her allies exist on Earth 38, while Arrow, The Flash and Legends happen on Earth 1. Over on The Flash, a trip to a different reality is as easy as a coffee run, so we’ve already scene characters from dozens of different earths (most of them played by Tom Cavanagh), but for Crisis, we’re going even bigger. 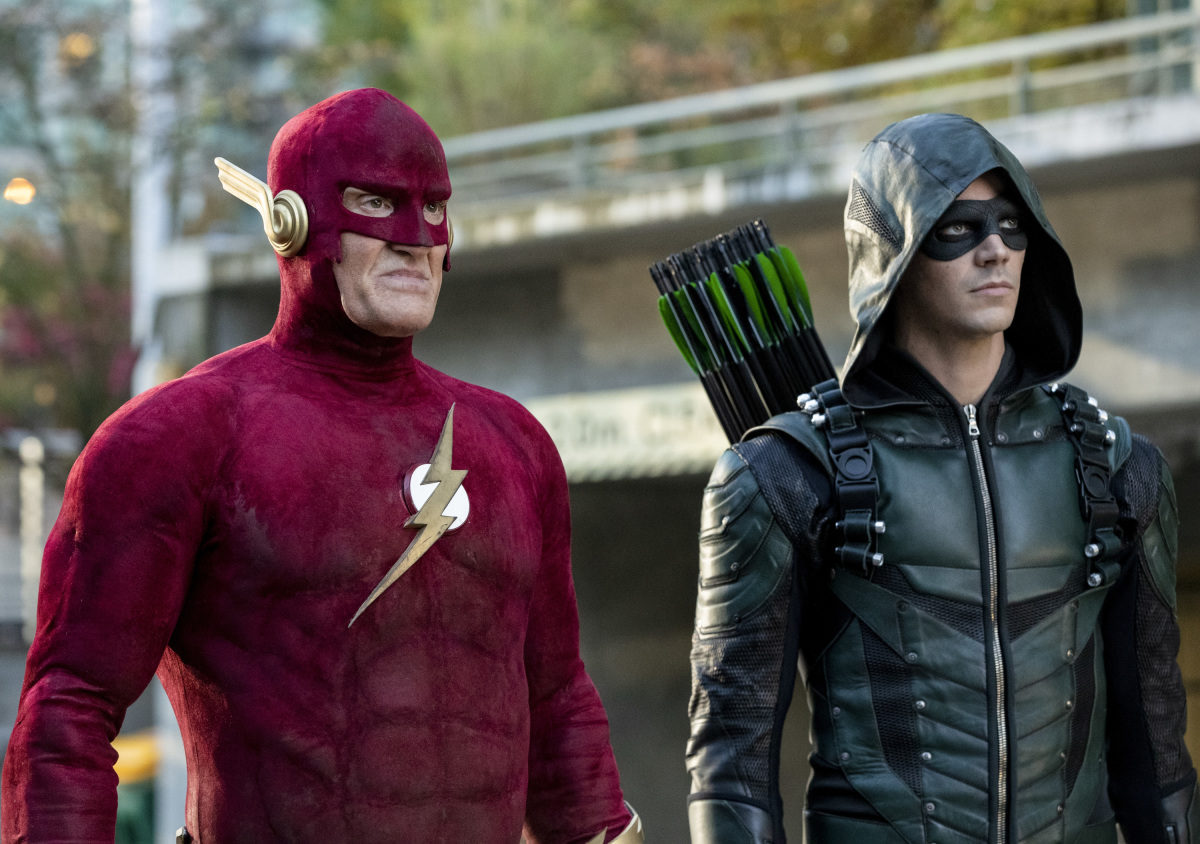 We already noted that Black Lightning characters, who exist in a third separate reality, will be joining the epic battle. And they’re not the only DC cousins coming to the party: John Wesley Shipp, who played The Flash in the 90s and appeared in the role last season’s Elseworlds crossover, will be back. So will Jon Cryer as Lex Luthor, Tyler Hoechlin as Superman and Bitsie Tulloch as Lois Lane.

Cryer and Hoechlin aren’t the only Super-stars we’ll be seeing in the event though. Brandon Routh, who plays Ray Palmer over on Legends, will be pulling double duty in the crossover as another Superman. Routh played the man of steel back in 2006’s Superman Returns, but revealed at comic con this version of Kal El will be of the Kingdom Come variety. But, holy casting coup, Batman, there’s more! Burt Ward, who played Robin in the classic Batman series in the 60s will be joining the fun, as will perhaps the greatest Batman of all time, Kevin Conroy, who voiced the Dark Knight on Batman: The Animated Series. 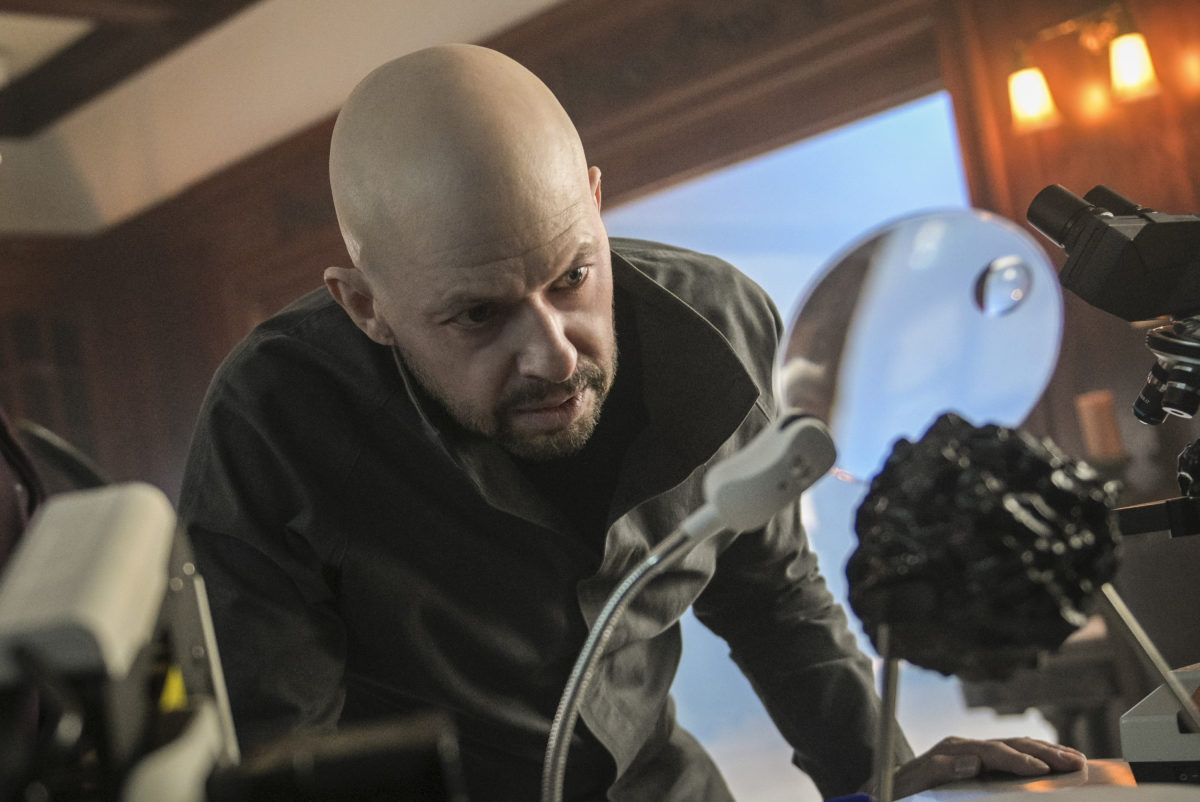 From these casting notices alone, it seems like all bets are off regarding what worlds the event will touch on. The Elseworlds crossover contained several Easter egg references to the Smallville versions of these characters, so who knows if we’ll see some those actors or locations pop up in Crisis. The possibilities are, well…infinite. There’s no reason why we can’t pop over to the DC Universe shows for a hot second too check in on the Titans or the Doom Patrol as the skies turn red. Hell, let’s see some red skies over Riverdale and a ’67 Chevy impala racing past.

So, what exactly is the big crisis? Elseworlds set the stage for Crisis with the introduction of The Monitor, played by LaMonica Garrett. The Monitor, well, monitors the entire multiverse and protects it from his evil double the Anti-Monitor. As you might guess, he’s not very nice.

In Elseworlds, The Monitor was using The Book of Destiny to test heroes of various earths to find the strongest allies to fight his brother. In that crossover, he also made a deal with Oliver Queen to save Kara and Barry’s lives…at the cost of Oliver’s eventually. In the season finale of Arrow, the Monitor was back to call in that debt from Oliver and begin the fight. The Monitor will be a big part of the final season of Arrow and once the skies start turning red, that means a Monitor is at work, and the battle will begin.

The Anti-Montitor also has allies. Elseworlds teased the introduction of Psycho Pirate (Bob Frazer) in the cell next to Dr. John Deegan (Jeremy Davies), who both may have a role bringing on the crisis. And of course, Tom Cavanagh is in the mix, playing yet another baddie; this time it’s Pariah, another pivotal character in the comics who serves the Anti-Monitor. We don’t know if this will be related to his roles a Eobard Thawne, who’s always been part of the grand, crisis design. 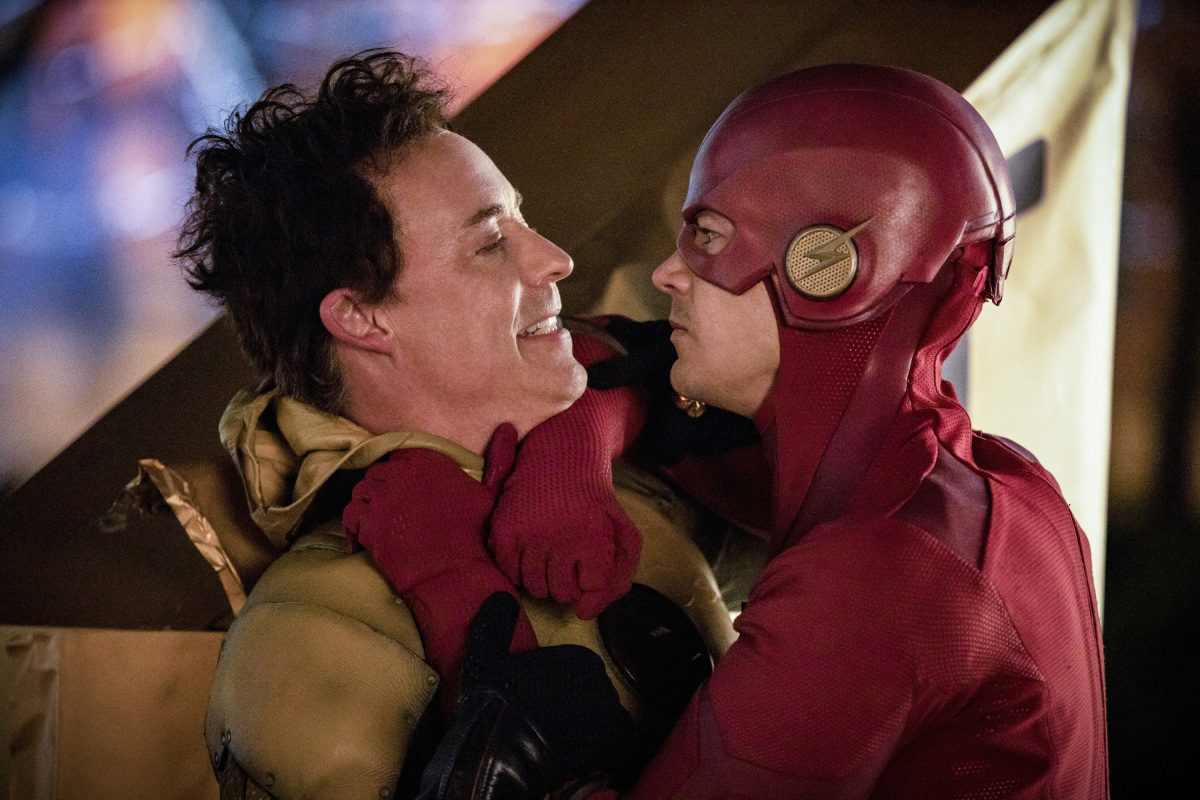 The idea of a major “crisis” has been teased since the first season of The Flash, which Thawn peaked at a holographic newspaper headline from 2024 blaring that the Flash has vanished in a “crisis.” Last season that date ominously reset to 2019 which means both Arrow and The Flash will be barreling towards Crisis in the fall.

Is Oliver Queen really going to die in Crisis? In the original Crisis on Infinite Earths comics, it was Barry Allen and Kara Zor-El who perished, but I don’t know how likely that is to happen (or at least, to stick), given that both heroes have entire seasons of their own shows remaining post-Crisis. But Arrow is ending, probably with Crisis (though that is not fully confirmed) and Oliver did make that deal with The Monitor. He was also really dead in those Arrow flash forwards from last season so things are not looking good for his survival. Then again, that might be too obvious and we’ll get a twist. 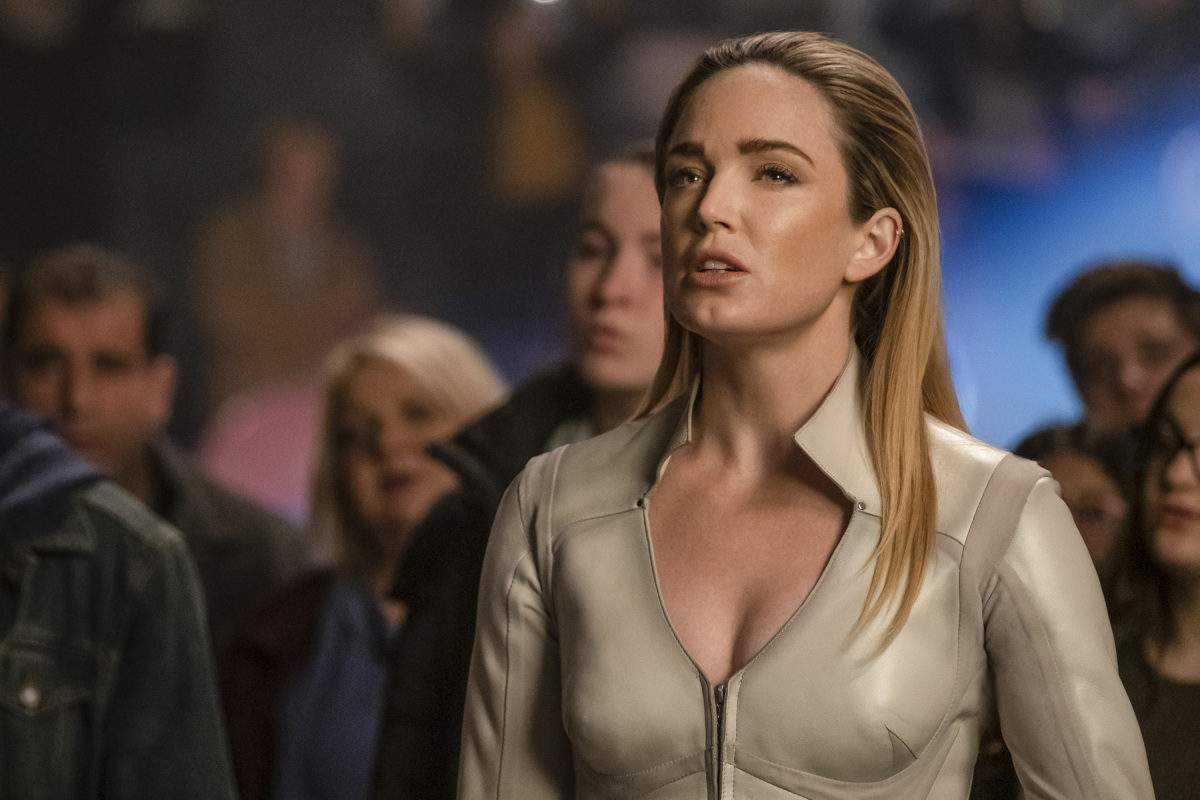 But there probably will be other casualties. My guess for the biggest: James Olson. Mechad Brooks is scheduled to leave Supergirl mid-season, and I can’t help but think that’s because he’ll die in Crisis. That will have a lasting effect, but the bigger consequence for all of the Arrowverse would be if the shows followed the comics and all the different multiverse merged into one. That would mean aliens running around Central City among other things, and some very awkward moments for Sara Lance and Alex Danvers.

The Arrowverse crossover are always a treat, and the best superhero team ups out there (Yeah, I liked Crisis on Earth X more than Infinity War. Fight me.) so  we have no doubt that Crisis on Infinite Earths will be epic. It’s really just a question of how epic. This is something the Arrowverse has been leading to for years and years, and it’s incredible that it’s finally happening. We certainly can’t wait to watch.