Someone's about to learn about the Streisand Effect. 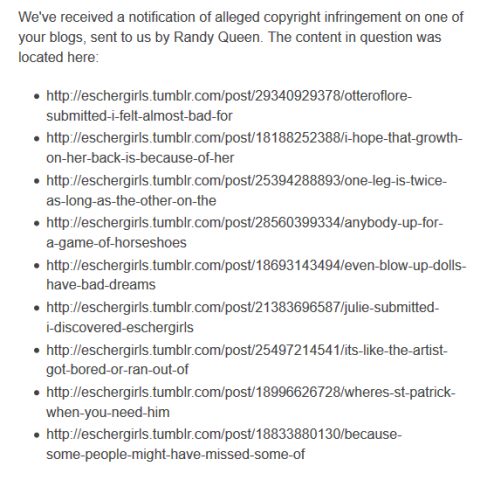 If you’re a comics loving feminist on the Internet, then you probably have a passing familiarity with Escher Girls and the sometimes snarky, oftentimes insightful work they do. If you’re a comic book artist who doesn’t understand the difference between defamation and constructive criticism (or copyright infringement and fair use, for that matter), Escher Girls is the bane of your existence. And, unfortunately, now the site is facing unfounded legal action from one particularly upset artist.

Named after the graphic artist known for his impossibly angled staircases, Escher Girls analyzes the accuracy (and, more often, inaccuracy) of the illustrated women of comic books, advertisements, video games, and other fictional representations. Topics discussed include to women who all have the exact same face, spines that appear to be broken, and our favorite, the boobs and butt pose.

However, Randy Queen of Darkchylde apparently took issue with the way his art was being scrutinized, filed Digital Millennium Copyright Act (DMCA) takedown requests with Tumblr and got every single post Escher Girls had ever put up about his comics removed, including reblogged “redrawings” of scenes from the comic—though there are some still up now which don’t include the original image.

When blog admin Ami Angelwings was informed of Tumblr’s decision (in an e-mail , above), she announced his actions on Tumblr to warn other blogs who might have criticized his work, and advised fans not to harass him on the blog’s behalf. That post was also briefly taken down by another DMCA request—despite having no images in it which fall under Queen’s copyright—and all reblogs of it up to that point were removed as well. When reached for comment, a representative from Tumblr informed us at The Mary Sue that this post was removed “in error,” and has now been completely restored. The reblogs which occurred prior to its removal, however, are still missing.

But that’s not all: Queen also privately threatened to sue Ami for defamation, sending her an email which invoked the “right to protect the perception of my IP” (which, as Techdirt notes, is not a right copyright holders have).

In the past few days he’s also sent more emails accusing Angelwings of instigating harassment towards him, threatening to sue her for content found in the Escher Girls comments section and for even talking about him publicly in the first place.

[Updated clarification: while Queen has sent more emails to Ami, the below tweets only reflect the statements made in his original e-mail, above. “Kim,” who is listed alongside “Eschergirls,” is a disqus commenter on the site.]

Hmm, Randy Queen has now sent me an email threatening me with legal action if I don’t stop talking about him period.

He’s also threatened me with a defamation lawsuit if my commenters continue to talk about him.

After these series of events, it should be abundantly clear that Queen’s goal is not to protect his copyright: rather, he appears committed to manipulate copyright law into removing any and all possible criticisms against his art. The analysis that Escher Girls does falls squarely into fair use, which holds that any reproductions of a copyrighted piece of material  “for purposes such as criticism, comment, news reporting, teaching (including multiple copies for classroom use), scholarship, or research,” are not considered an “infringement of copyright.” Using the DMCA to remove fair use content in this way amounts to censorship, and has done more to hurt Queen’s reputation than his original drawings ever could.

When we reached out, Angelwings declined to comment on the situation on the advice of her current legal council, but is on record as saying she would have happily taken down the posts herself if she had received notice from the artist. On the about me page, she stresses the goal of Escher Girls is not to shame individual artists for problems in their work: it’s to shame the art community at large for prioritizing sexual attractiveness over basic concepts like anatomy and physics. She writes:

Just because something shows up on Escher Girls doesn’t mean I think the series is terrible, or I hate the character, or that nobody should buy/play/watch/read it. Often I’m just noting something I find ridiculous or amusing in an image, and I’m not making a comment on the rest of the series. I’ve said this a lot before. A thing can contribute to an overall way that women are portrayed in media, (and collecting them to show how often they occur is part of the point of this blog) but it doesn’t mean I’m condemning the show/comic/toy series/etc, saying that it’s inherently broken and must be ignored, or that fans of it are bad people.

In fact, Escher Girls spends a large amount of time providing drawing resources to budding artists, and has a lot of support from industry insiders and other notable geeks:

I have had books I worked hard on featured on @escher_girls and the response I had was, “Well, they were right on that one.” — Gail Simone (@GailSimone) August 5, 2014

@GailSimone @escher_girls hey, my piece was there once, and i laughed my ass off and wholeheartedly agreed XD i drew some crazy ass anatomy — stjepan sejic (@stjepansejic) August 5, 2014

I see today that two of the top five Google listings for “Randy Queen” are about him being a jerk. Streisand Effect: Still in effect. — John Scalzi (@scalzi) August 5, 2014

We also reached out to Queen for comment, but have yet to hear back. We will update if we do.

Not a response I would recommend RT @Robot6: Randy Queen responds to critics with takedown notices, legal threat http://t.co/DYRMumi5om