You just can't please some people. Sorry, did we say 'people?' We meant 'jerks.' 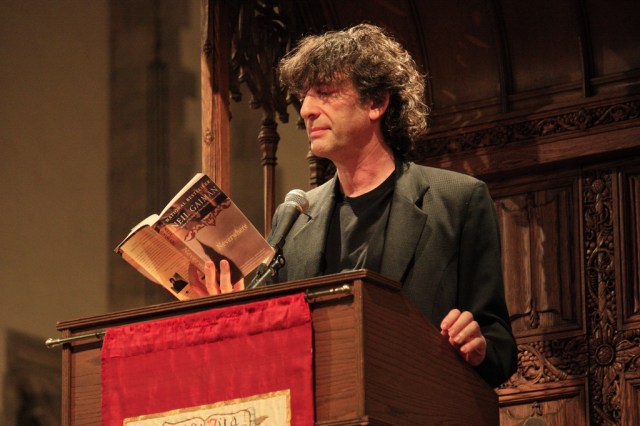 Not even a month after Banned Books Week came and went, a school in New Mexico has decided to remove Neil Gaiman’s classic fantasy novel Neverwhere from both their curriculum and their library after one parent complained of sexual innuendo. Wait, sexual innuendo? Really? Out of all the things you could have objected to in that book?

Nancy Wilmott, a parent in the Alamogordo high school district, was apparently shocked to learn that her sophomore daughter was reading the book as part of her required reading list, as she believes it contains “R-rated” material that would not be suitable for a 15 year old to be reading. According to NPR, the offending passage occurs not 80 some-odd pages into the book and reads thusly (warning for explicit language if you’re get really broken up over seeing the F word in print, which we sure hope you don’t):

That’s it. The whole thing is only two paragraphs long, and as far as I can remember, that is as sexually explicit as the book gets. Heck, Romeo and Juliet gets more graphic than that once you parse out all the Elizabethan slang. Meanwhile in the rest of Neverwhere (spoiler alert!), the entire family of one of the main characters is depicted being brutally murdered maybe six or seven pages before the above scene, and later in the book (no seriously, SPOILER ALERT) another character gets literally honest-to-God crucified at the behest of an evil angel.

But no, sexy makeouts bad! Boo! Bad extremely-minor-characters-that-we-don’t-care-about! Stick your head in cold water and repent!

According to New Mexico’s local radio station, KQRE, this is the first time that the Alamogordo High has heard any complaint since they first put Neverwhere on the school curriculum in 2004. One of the teachers at the school, Kathy Wallis, recently issued a comment saying that the entire  English department objects to the ban and that Wilmott has over-exaggerated the situation in her zeal to get the book removed:

[Wilmott] publicly stated that the school was “forcing” her student to read the novel (not true), and she also stated that the school never offered her daughter an alternate selection when she objected to Neverwhere. This statement is one that we will vehemently deny.[…] I work with the teacher in question – a very capable and intelligent young woman that is an asset to the English Dept.- and she immediately provided an alternate novel to the student as soon as the mother made the first known objection to Gaiman’s novel.

Neil Gaiman has also commented on the Neverwhere ban, telling NPR that “I’ve not seen it described as ‘R Rated’ before, and mostly worry that anyone who buys it thinking they are in for lashings of Sex and Violence will be extremely disappointed.” To be fair, Neil, you do kill a whole bunch of people in the book, but we agree — there aren’t exactly George R.R. Martin levels of carnage here, and removing it from bookshelves to appeal to a single person seems misguided at best.

Wilmott, however, stands by the action she took to get the book banned. “A parent can’t read a 400-page-book to find out if it’s appropriate,” she told KRQE. “You rely on your school to do that for you.” Wait, but then if she didn’t read through the book, how would she even know about this passage? Something smells fishy here, guys — and it’s not the floating market on the HMS Belfast.