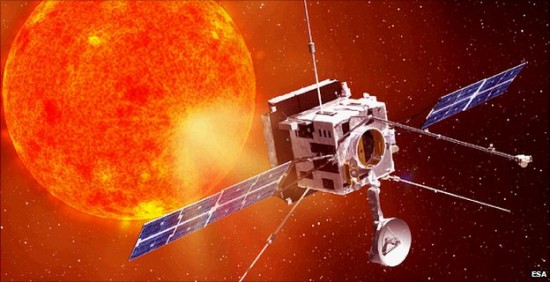 Just a few days ago, the European Space Agency (ESA) accepted a proposal for the Solar Orbiter project. The project involves the construction of complexly heat-shielded probe due to be launched sometime in 2017. On its orbit around the sun,  it’ll come as close as 42 million km, a record-breaking proximity. While it’s largely an ESA undertaking, NASA will be lending a helping hand, providing a few of the components for the probe and the rocket that’ll take it into orbit.

The project rose up out of the ESA’s Cosmic Vision initiative, which plans missions as far as 10 years into the future. The various candidates were subject to four years of debate and consideration before the Solar Orbiter was chosen as a successful one. Considering the probe will have a 1 billion euro price tag, every second of that debate was probably worthwhile.

The technology behind the Solar Orbiter has been in the works since the 1990s, but it still manages to be extremely high tech, and it’ll need to be if it wants to get that close to the sun. The Orbiter’s fun bits that’ll actually be doing all the data capture will need to hide behind a huge heat shield in order to survive the 500 degree heat at that distance. The shield will have some small slits and openings through which the cameras and such can peak out for just long enough to get their jobs done before going back to hide.

The goal of the Orbiter is not necessarily to take crazy, close-up, pictures of the sun, although it probably will do that while it’s over there. Instead, the idea is to try and understand the way things work on the sun and the way that relates to the things that happen in the space around it. Tim Horbury of Imperial College London, one of the project’s lead scientists, put it this way:

The solar wind and coronal mass ejections – these big releases of material coming off the Sun; we don’t know precisely where they’re coming from, and precisely how they’re generated. Solar Orbiter can help us understand that.

It’s a pretty worthy cause I think. We spend a lot of time searching out into the depths of space for exotic, planets and stars, but it’s about time we really explore the relationship we have with the star next door. After all, she’s pretty important to us.